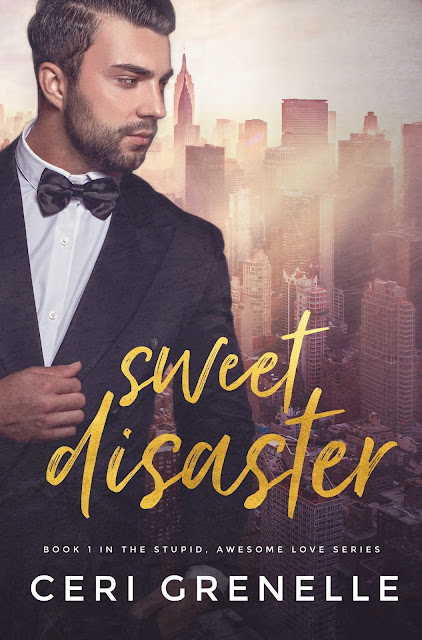 Title: Sweet Disaster
Series: Stupid Awesome Love #1
Author: Ceri Grenelle
Genre: Contemporary Romance
Release Date: June 7, 2018
Blurb
Sophie…has stupid awesome sex with a stranger.
New York City summers are hot and sticky, which only makes what I’m feeling for the asshole in my new building even messier. Usually, I quietly reserve my opinions for my
news articles, but when Tony argues with me, he tempts me to give in to my crazy. I yell back. He smiles. Something in me melts.
It was only supposed to be one time, but we can’t get enough.
With Tony I’m a new person, brave and unashamed. But anything between us can only be a fling. He’s offered a job in Rome. That’s good, right? With a long history of unreliable relationships, messy emotions are a complication I don’t need.
Tony…has a sexy new neighbor.
I’ve worked my ass off to climb the ladder at my company, even threw away my passion to prove I’m worth something. When they offer me a high position, I should be focused on my work. But no one’s ever spoken to me the way Sophie does. She pushes buttons I don’t know I have. Forces me to confront a dream I gave up long ago.
In two months, we go our separate ways. No hurt feelings. No misunderstandings. That’s the deal. She doesn’t need to know I’ll be playing for keeps.

I know, another review this week.   I will have to admit that this one was tough to finish at times.  I’ve never truly DNF’d a book but this one almost became one.  Let me tell you why…Sophie.  I never felt a connection with her until maybe halfway through the book.  Honestly, she acted like a shrew and while the fighting with Tony is supposed to be foreplay for them, I just couldn’t find it funny after awhile.  In fact, at times, I skipped the smexy parts because of it.  Shut up.  I did.

That said, I LOVED Tony.  Just loved him.  I couldn’t find anything wrong with him, even though Sophie could throughout the whole book.  I really felt for him in terms of his really wanting a true relationship with Sophie but she wouldn’t have anything to do with that.  I did, however, understand why Sophie acting the way she did but after some time, I got bored.  There is only so much fighting/dirty sex that I can take.

Of course, you are probably thinking that I hated the book.  I didn’t.  Not.at.all.  In fact, once, Sophie FINALLY decided to open herself to the possibility of a real relationship (meeting the rents) that I fell in love with her.  Did she do some things after that, that I shook my head at?  You bet but I finally got her.  Tony got her.  I loved that line in the book.  “I got you”.  *swoon*  What made me fall in love with Tony from the beginning is that even though Sophie held back, he never did.  He was upfront and honest with her.  Okay, his ma kinda lied but when the tough got going, he was always there for her.

Gemma…Sophie’s sister.  OMG!!!!  I MUST read her story.  Sadly, I have to wait until September but she was a terrific secondary character for BOTH Sophie and Tony.  Tony’s brothers, Nick and Santi.  Same.  The batting cage scenes were hilarious and it truly resounded with me the importance of family…no matter who is in the family.

I will not tell you how it ends because I honestly thought it was hopeless.  That said, I really fell in love with the book.   Just keep in mind that this book is dirty, sexy, funny, your heart with bleed out in some spots but overall, a book and a series that I have on my keeper shelf. 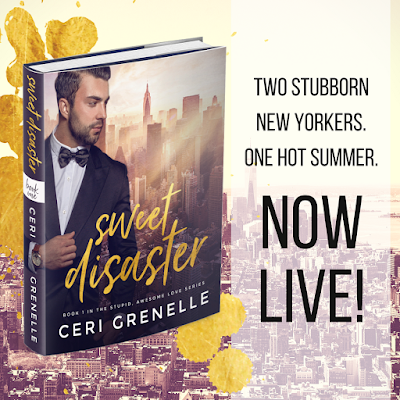 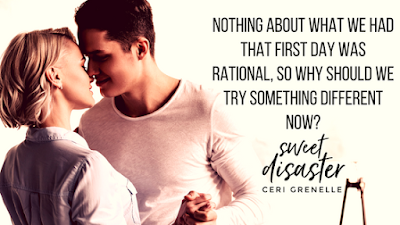 We’re in my
apartment again, the space getting smaller and smaller with every second I’m
near him. We’re so close to each other, yet a million miles away.
He sets the
boxes by the entrance and runs his fingers through his hair as he straightens
from a crouch, his slacks stretched taut over muscular thighs.
His hair
looks soft. Does he highlight it to get that color? Beautiful amber streaks
piercing through pitch black.
I push my
hands through my curly, pixie-length haircut, mussing it up to distract myself.
I gnaw at my bottom lip and press down till I feel a pinch, a reminder not to
stare at him. It’s just so damn hard.
He catches
me looking again, and I glance away, coming down from the high of strong
emotions and physical exertion. But it’s not enough. I feel anxious and
incomplete, like I’m missing something.
Like
whatever is passing between us isn’t over.
“I’d say
thank you, but I don’t think you helping me makes up for your dickishness
earlier.” I shrug, unrepentant.
He doesn’t
move, just keeps looking at me as his hands slowly lower. No other response. My
heart beats a little faster when he licks his lips, and wet heat that has
nothing to do with summer humidity blooms between my legs.
“You can go now.” I don’t really want him to
go. I want him to stand in the middle of my apartment, so I can stare at him a
while longer. The last time I was near a man so beautiful was for an article I
wrote on the trials of the male model life. Those guys are paid to be gorgeous,
but they’ve got nothing on Lord Linguine.
He nods, as
though he hears and understands, but makes no moves to leave. He just keeps
looking at me, and now he’s touching his bottom lip with his thumb. Dear Lord,
his mouth is sumptuous. No, not just sumptuous. It’s fat and thick, made more
tantalizing by the way it plumps whenever he bites down.
Who is this
guy?
He’s been
carrying my heaviest boxes up and down the stairs without a drop of
perspiration, like some Greek god. I’m sweating worse than a roasted pig and am
most likely still flushed and red after our argument-thanks, Irish coloring. My clothes
are wrinkled and gross, and I can’t recall if I brushed my teeth this morning.
But I know
the look he’s giving me, like there’s nothing in the world he wants more. It
should scare me. I don’t know him at all, and yet…and yet…that itch in my skin is all from
him. One argumentative word from my new neighbor and I’ve unleashed more
personality on the world than in the past five years.
Male desire emanates from his gaze like the
sun at high noon; no doubt I’ll get burned if I don’t protect myself. I would
usually feel uncomfortable, wary even, if someone I don’t know keeps staring at
me like he does, but after spending the last hour with him—feeling his hand on
my back when I nearly missed a step on one of our ascents, staring at his ass,
watching his muscles tense and roll with every step, watching his lips like my
favorite TV show—all I feel is an intense need.
The
realization slaps me in the face so hard I nearly take a step back.
I want Lord
Linguine. I want his beautiful body covering mine. I want his lips on places
that haven’t felt the touch of a man in longer than I care to admit. I want him
inside me. I want him to use my body till I’m wrung out and this awful day is
erased.
But all I
say is, “See you around the building.”
Again, no
response, just staring, with the occasional lip licks or flickers of his gaze.
He’s looking at my body the same way I’m looking at his. Seeing him want me
only makes me want him more.
Proof of
his humanity shows as moisture drips down the side of his tanned face, tripping
over a thin layer of manicured stubble. Shit, he’s beautiful, in a brutal, New
York City way. And considering the way he shifts, his tight-fitting trousers
stretching taut, a long hard line now highlighted at the front of his pants,
I’m pretty sure he’s thinking the same thing about me.
I bite my
bottom lip deliberately to see what he does. He watches the move then finally
speaks. His voice is as far from the riotous nature of our initial encounter as
it can get.
“I could
stay, help you unpack some stuff.”
I nearly
prevaricate, but decide to stick to honesty. We both know what’s happening
here.
“That’s not
what would happen if you stayed.”
“It’s your
choice. If you don’t want me to stay, I’ll leave. We’ll nod at each other as we
pass in the hallway, like this was an unremarkable encounter. We’ll go back to
being strangers. I don’t want that, but I promise I’ll leave if you do.”
“Oh, now
you care what I think?” Stalling. Stalling, I am so stalling.
“I’ve been hanging on your every word for the
past hour, and in no world would I ever want to make a woman uncomfortable, so
yeah, I care a whole fucking lot.” His body is tense, practically vibrating,
yet he stays put. Waiting for me.
“Tell me
what you want, baby.”
Do I want
what he’s offering?
“I’ll make
you feel so good.”
Uninhibited
sex between strangers?
After the
day I’ve had?
He takes a
step forward. We’re nearly on top of each other now. My hands itch to touch
him. “Say yes.”
Fuck yes, I
do.
“Yes.” 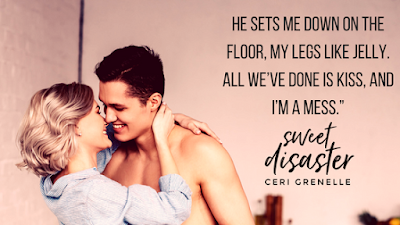 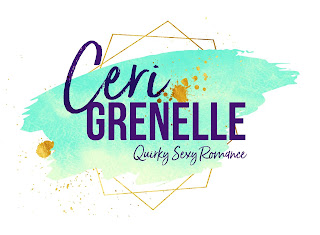 Ceri is the author of quirky and sexy contemporary romance
novels. She has a major weakness for sappy cuddle moments as much as hot and
steamy sex scenes, and a penchant for writing snappy and sarcastic dialogue.
She loves romance that isn’t afraid to be awkward and uncouth, and thrives on
flawed characters with big hearts.
A New York native, Ceri now lives in California with her two
cats, Mercy and Eugene Fitzherbert, who should be very thankful she didn’t name
him frying pan. She is a proud functioning introvert and lover of all things
geeky. You can find her haunting the Twitter machine or posting pictures of her
ridiculous cats on Instagram.
Want exclusive content, bonus scenes, and more? Sign up for my newsletter.
Author Links
FACEBOOK
INSTAGRAM
TWITTER
PINTEREST
NEWSLETTER
AMAZON
BOOKBUB
WEBSITE 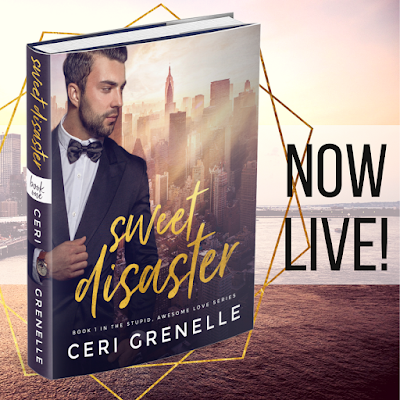