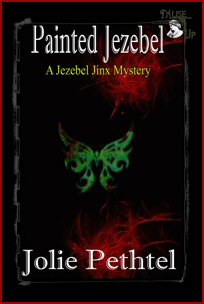 Publicist Finn Mackenzie has always been lucky, until an ill-fated affair with a vindictive writer leaves him one chance for redemption: a spectacular public appearance by the elusive best-selling romance author, Jezebel Jinx.

Unfortunately, the cute but kooky writer refuses to cooperate. Jezebel believes she’s cursed with bad luck. Riddled with anxieties, she never leaves her home–until the gorgeous, albeit desperate Finn whisks her away to a writer’s conference, against her will.

After the initial shock wears off, Jezebel’s dormant hormones kick into high gear around the hunky Finn.

When his ex turns up murdered and Jezebel is the prime suspect, ill-planned sexcapades are the least of their worries.

“Someone was just murdered and I’m the prime suspect. Detective Tyler has gone around smearing my good name with everyone at the conference and here I am strutting around in a bikini. Don’t you think a one piece might have been more—I dunno—respectful?” Jezebel hovered uncertainly in front of the door marked heated pool. “Maybe a black one piece to show I’m in mourning.”
“You can’t flirt with lifeguards in a one piece. It just isn’t sexy enough. Besides, you aren’t in mourning. No one is. Did you see the celebrating going on in the bar? ‘Ding dong! The witch is dead’ is pretty much the attitude in there. If they could give you an award for killing her, they would.”
“I didn’t kill her,” Jezebel hissed.
“No, you didn’t, but if you want to prove your innocence you need to seduce some information out of that lifeguard.”
“My boobs are too small to seduce anyone. My legs are really my best asset, which I could display just as well in a one piece.”
“Rick might be a boob man. That is why you are wearing a size too small and we bought a bikini that lifts.” He mimicked cupping and lifting with his hands, without actually touching her breasts.
“I’m going in.” Jezebel stated as she rolled her eyes, and then stepped toward the pool area entrance. “Think sex goddess,” she ordered herself, adding some strut to her walk.
Finn insisted on the fire engine red bikini and matching strappy high heeled sandals. Who wore high heels to the swimming pool? This was wrong on so many levels.
“You look smokin’ hot, babe,” Finn called out. His idea of encouragement. Well, that was nice to know. Jezebel added a little roll to her hips just for his benefit, before pushing open the door and disappearing from sight.
She spotted Rick right away. He sat on his chair like a Greek Adonis, wearing nothing but snug bathing trunks, a whistle and a smile. The pool was filled with women vying for his attention.  Her self-confidence slipped a notch.
Jezebel hesitated a fraction of a second too long as she neared his chair, and then kept on walking. No way was she going to humiliate herself like this. They would just have to find another way to acquire the information.
“Hello gorgeous,” the lifeguard drawled following it up with a whistle and not the ‘behave in the pool’ kind.
Jezebel froze and then slowly smiled. Ah, an ass man. She attempted to spin around gracefully, but grace and spiked heels did not go hand in hand. Just as she was face to face with her target, she slipped and tottered drunkenly on the tiles. In her defense, they were black and the wet spots weren’t particularly visible. She had a brief unpleasant flash of déjà vu, and then the life guard was on his feet, catching her in proper heroic fashion.
“Feel free to drop in anytime.”
Ugh! Did he just say that? The man was so much hotter when he didn’t speak. All brawn, no brain. How disappointing. So what did she say now? Jezebel wasn’t particularly good at suggestive small talk with half naked strangers. She tended to fluster easily. The hidden agenda only increased her nervousness. Where were the cue cards when you needed them?
“You saved my life! How can I ever thank you?” she gushed, fluttering her lashes.
“Do you have something in your eye?” He frowned down at Jezebel, before setting her on her feet.
“I was just a little—um—disoriented for a second.”
“Are you sure? It looked like you were having a seizure there or something.”
“I’m sure.” Jezebel was absolutely mortified. Thank God Finn wasn’t witnessing this. She would never live it down. Just then she caught a glimpse of him pulling off his T-shirt and diving into the deep end in nothing but a pair of modest swim shorts. Not fair. Not only had he overheard every embarrassing word, his smug grin left no doubt, but he was holding himself to a different standard. He should be demeaning himself for the greater good by wearing a pair of revealing swim trunks.
The women swarmed around Finn splashing playfully and damned if he didn’t love every second of it. Jezebel wanted to strangle him. So he wanted to play it that way, then fine. She could play too.

Jezebel’s stomach lurched abruptly, jarring her back to consciousness. Flashes of bright, white light burst behind her tightly closed eyelids and she knew this was going to be one killer hangover. Her memory was a bit hazy—a complete blank really. She didn’t recall getting drunk and blacking out, but she must have. Happy Birthday to me.
The day was a complete bust, of course. She’d have to write twice as much tomorrow to meet her deadline. All she wanted right now was some aspirin for her pounding headache and a good night’s rest. Maybe tomorrow her mind wouldn’t be so fuzzy.
Jezebel gingerly opened one bleary eye and then the other, trying in vain to focus on something—anything. She only succeeded in making herself dizzy and nauseous. The scenery passed by in a blur, with only one consistent focal point—a continuous row of palm trees and while Arizona was thick with palms, there weren’t any in her neck of the woods.
The implications were sobering. Dear God, this had to be a nightmare. Even in her present groggy state, she could tell she was no longer safe and secure in her cabin.
Worse yet, she deduced she was in a moving vehicle, being transported to God only knows where, and with each second that passed Jezebel sped further and further from the only safe haven she had ever known.
She would never have consented to such a thing of her own free will and with this realization confusion fled and panic set in. She was being kidnapped!
Jezebel wanted to scream and yell for help, but knew instinctively that if she did, her head would likely explode. The pain was excruciating.
She touched carefully around her skull with the tips of her fingers. She suspected a blow to the head had caused her current unfortunate circumstance, but no evidence supported that notion.
“Hello, sleepyhead,” the kidnapper greeted her in a cheerful tone. She knew that voice. The familiar Irish lilt. It was that attractive, if annoying, publicist. She knew he was desperate to attend some conference, but kidnapping? The man was a lunatic. She’d witnessed his desperation first hand, of course, but never imagined he would dare go this far. How had he managed to lure her out of her cabin and into his vehicle without a single protest? Jezebel fought to remember. She should have screamed the house down. What he accomplished was an impossible feat, but he was more devious than she had given him credit for. There was only one way he could have pulled this off.
The bastard drugged me.
“What did you do to me?” Jezebel rolled her head to the side with considerable effort to give him her most fearsome glare. He didn’t even flinch.
“I just gave you some sleeping pills.” He shrugged.
“Some?” Her voice rose to a screech. “How many is some?”
“I don’t know. I just crushed a bunch and spread them over the pizza. Who would have thought such a dainty little thing could eat a whole pizza by herself?”
“You could have killed me!” Jezebel was horrified.
“You have been sleeping a long time,” Finn admitted. “I was starting to worry, but you seem fine now.”
“Fine? I am so not fine!” Jezebel began to hyperventilate. “Oh God! I—can’t—breathe!”
“Don’t worry. I came prepared for this.” Finn pulled over to the side of the highway and handed her a paper bag.
“What—the Hell—is this?” she wheezed, studying the bag as if it were a foreign object.
“What does it look like? It’s a paper bag. Cover your mouth with it and concentrate on breathing in and out slowly, until the feeling passes. You’re having a panic attack.”
Jezebel closed her eyes and did as instructed, albeit resentfully, holding the bag over her mouth until her breathing steadied. Still clutching the bag, she turned to face Finn. “Please tell me you brought my medication.”
“Medication?” he frowned. “I looked through your medicine cabinet and I only saw the prescription for sleeping pills. There were no other prescription medications.”
“I keep them in my nightstand in case I have an anxiety attack during the night,” she attempted to explain patiently. “Please tell me you brought them.”
“Sorry, no. It looks like for this trip we’re going to have to do it old school.” He gestured toward the bag. “No drugs.”
“Old school!” she shrieked, hitting Finn over and over with the paper bag. If only she had something harder that would inflict more pain. A blunt instrument maybe, but she had to make do with what was available. Heck, with a little luck maybe he’d suffer a nasty paper cut. “Are you out of your mind? You—are not—a doctor. You are not equipped to handle my condition. You have to take me home. Right Now!”

Jezebel Jinx is a character that I have never read before.  She’s beyond quirky, she has real issues regarding your phobia and she gets tongue tied around her new publicist.

ABOUT THE AUTHOR:
Jolie Pethtel was born in Ohio, but raised in Arizona, where she met her husband Jim. Jolie has since moved to Indianapolis, Indiana where she lives with her husband and their six rambunctious children. Jolie is a Domestic Goddess by day and Writer by night.
Author Website: http://www.jezebeljinx.com
Fan Page: http://www.facebook.com/joliepethtel
Facebook: http://www.facebook.com/profile.php?id=100002016243117
Twitter: @joliepethtel

One thought on “Painted Jezebel-Review”