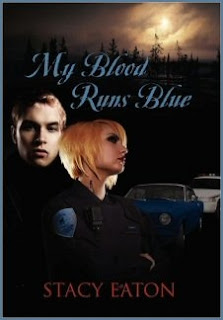 I am very excited to have Stacy Eaton on my blog today.  First, she a policewoman or more correctly, a patrol officer.  She’s married to another cop and she’s a mother.  I sent her a list of questions and she graciously answered them.  I also had the opportunity to read the first book in her series, “My Blood Runs Blue” and my review follows her interview questions.  Her contact information is at the bottom and the next blog tour stop is at http://ragesexandteddybears.blogspot.com/.  Thank you so much for stopping by and without further ado, here are her answers. 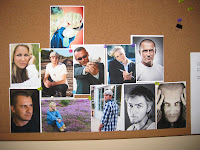 Top ten things you don’t know about me:1.  Cotton or Silk? Depends on what I’m doing… lol… Sleeping – give me comfy cotton – out on a date with my hubby – bring on the silk!
2.  Champagne/beer/wine?  Beer – always take a nice cold long neck bottle over a delicate crystal glass.

3.  Plotter/pantser – Definitely a Panster.  I write very organically, an idea comes to me and while I might know where I want it to go, it don’t plan things out, I just sit and write and let it get there on its own.

4.  Describe your workspace – My desk area is an L shaped desk, two printers (a black laser and a color inkjet), mail scale, adding machine, lots of stand-up files and a huge assortment of other “standard” office supplies.  The most unique thing about my workspace is the bulletin board I have up in front of me. 4’ x 3’ I put up pictures that help me focus on the characters I am writing about.   (I have attached a photo you can use if you would like)

5.  Sports fan or just tolerate it? Lol….  I work with mostly men, I tolerate it.  There is always some sports show on the T.V. at my station, and I just use it as background noise to do my reports.  At home the only sport I watch is the Tour de France and maybe some other cycling races when my husband is watching them.

6.   You are a policewoman by profession; can you share a funny story with us?

It was probably around 1 or 2 in the morning.  The roads were quiet and I was driving around just doing patrol.  I came to a four way intersection where a car was sitting there not moving.  The vehicle was running and the lights were on but the car just sat there. I waited to see if it would go, but it stayed there.  I lowered my window and I could hear the music blaring out of the car, I drove up next to the car, the windows were down and a man was sitting in the car. I wasn’t sure if he was asleep or dead.  I pulled away from him and called for another car to come assist me.

When the other officer, who happened to be my best friend, showed up , we rolled up behind the vehicle.  I called out the stop and we got out of our cars.  As we approached the vehicle, there was no movement inside and the vehicle was running with the music at full blast.

We looked inside the vehicle and found a man passed out, reeking of alcohol, enough to make my eyes water. I looked up at Kristin who was on the other side of the car, she was shining her light into the car and I knew that I needed to turn the car off before we woke the guy up.  I didn’t want him panicking and trying to drive off on up.

So I reach in over the steering column and turned the key to the off position.  Now what makes this really funny I this car is at a stop sign pointing up a hill. The hill is at about a 45 degree angle.  As I turned the key off, I heard Kris yell just as the music cut off, “The cars in DRIVE!”

So as soon as I turned the car off, the transmission turned off too and the vehicle immediately started to roll backwards down the hill – and down towards my patrol car.

The looks on our faces as the car started to roll!  Man I wish I had had this on camera.  We both grabbed a hold of the windows as they were both open, so we were leaning into the car, trying to stop it.  Like 2 women who both weigh a total of 240 lbs were going to be able to stop a vehicle that gravity had taken hold of!

The vehicle rolled back about 10 feet and hit my patrol car.  Both of us were still hanging on the car and as it hit the car, the driver finally woke up.  It wasn’t us screaming that did it, it was the gently impact of the bumpers.

Needless to say, the driver was taken into custody and his car was towed.  When the tow truck came to take his car, he pulled it off my vehicle. My patrol car didn’t have a mark. The other guys car had a small dent in the plastic bumper so I grabbed my camera to take a picture of it. Just as I raised the lens, the dent popped out. There were no marks on this car at all now.

Kristin and I realized a few days later that we had been trying to stop the vehicle so hard that we both ended up with bruises on the backs of our arms from where we were trying to hold it. This story has come up a whole bunch of times and we are always wiping the tears away when we talk about it.

7.  Favorite food –Actually I’m not a big food fan. I eat what is put in front of me when I am hungry.  I have a lot of food allergies so I don’t enjoy food as much as I used to.  But I would have to say that Chocolate and Coffee are my joys.
8.  When did you start writing?   I didn’t start writing until October of 2010.  I sat down and wrote my first novel, My Blood Runs Blue in about 9 weeks.  The sequel was written in about 11 weeks shortly after that one.

9.  If money were no object, where would you like to live? Somewhere near the ocean on the east coast.  I love to watch the sunrise over the ocean, feel the breeze and the temperature warm as the day starts.
10.  What’s next for you?
Currently I have 4 other projects in the works.  The third book in the series is one of them!   I am also working on a novel that deals with Domestic Violence called “Whether I’ll Live or Die”.  You will see this one written from the point of view of a victim and the point of view of a police officer.

The third project I am working on is a contemporary romance called “Liveon”.  In this one, a detective is put undercover to protect a movie star during a filming.

The fourth one is the biggest project.  It is a series I am writing with author, John Walker.  The series deal with addiction, all kinds of addiction.  This series is a very deep, dark and gritty series that will dig into drugs, alcohol, sex and money, along with many other addictions people have.  Currently we are about half way through the first book, Blue Haze!  I am loving project; because it is much different than my other books.  While I still write from the point of a police officer, I am writing a much darker person then I normally do!

Thank you so much for allowing me to visit!!! I really enjoyed it!


This is the start of a series from Stacy Eaton.  Ms. Eaton is a policewoman herself and her terminology and imagery relating to Kristin’s job are vivid and realistic.  Plus, the setting for the series is not far from where she lives, too.  I was taken back by all the terminology and police procedures that Kristin has to go through on a daily basis.  Kristin is a lonely woman.  Sure her life is full with friends and her job but she has no one to share it with.  With one phone call regarding a homicide, her life will change forever.


As most of you know, I review for several websites, so I will not go into plot points, summaries, spoilers and such.  I will tell you that I was blow away by the writing style of the book.  Its brilliant, I say.  The book is written in three different points of view.  Each chapter is a POV and its brilliant.  The scenes intertwine between them so you are not lost on the emotions, actions and reactions that the other characters have to one another.  With this is mind, the book flowed better and the pacing was quick and less jarring to me.  I would not have wanted to be Kristin and picked from either Julian or Alex.  I was a little disappointed towards the end of the book when I thought she had chosen who she wanted and why.  After reading one of the man’s chapter’s after the disappointment, it all made sense to me as to who she picked and why.  I was happy with her choice and her reasons why.


I would highly recommend My Blood Runs Blue for anyone that would like to read a completely different take on the vampire genre.  Its bold, fresh and for this reader, much more believable.  Ms. Eaton has written a story and characters with a fresh twist and I can’t wait to read the further adventures of Kristin, Julian and Alex.