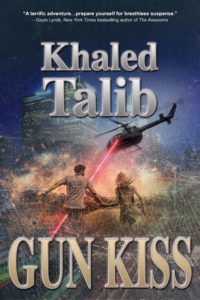 The United States media is abuzz with news of the mysterious disappearance of Hollywood movie star, Goldie St. Helen.

Ex-Delta Force Blake Deco receives a tip from a Mexican friend that a drug lord, obsessed with the beautiful actress, is holding her captive in Tijuana.

With the help of a reluctant army friend, Blake mounts a daring rescue.

What he doesn’t expect is to have feelings for Goldie—or that a killer is hunting them.

A man wearing a red bandana around his head leaned out on the skid with a sniper rifle.

“Get us out of here!” Blake yelled.

Jack swerved the vehicle to avoid the sniper’s fire and spun a U-turn. He floored the accelerator, zigzagging away from the consulate.

“Get down!” Blake forced Goldie to the floorboard. He then powered down his window, stuck his arm out, and unleashed a volley of shots at the tail rotor.

The helicopter jerked and tilted, yet remained relentless in its pursuit.

“Drive faster!” Blake yelled, feeling the riddle of sniper bullets pinging the back of the SUV.

Blake looked at Goldie crouching on the floorboard. “You okay?”

“They’re not shooting at you. They want you alive, and us dead,” Blake said.

“How can you be sure?” Goldie asked.

“He’s using a sniper rifle instead of a machine gun,” Blake said. “Picking his shots carefully.”

“No prizes for guessing who gets it first,” Jack said.

The shots from the helicopter forced an oncoming van to careen off the road. Two other vehicles braked hard and swerved uncontrollably.

Through the windshield, Blake saw the man on the skid taking aim again.

Tightening his grip on the wheel, Jack spun the SUV around, back toward the consulate. He didn’t turn fast enough. The impact of a bullet hit the rear window, cracking it into a spidery web.

Welcome Khaled Talib! Please start off by telling us a little about yourself.

I was born in Singapore. I’ve written three novels and I’m presently working on my fourth. I was a magazine journalist before switching to the field of public relations. My career took me to various parts of the world, and I also spent some years in Cairo working for several media.

Is Gun Kiss a single title, or part of a series?

Gun Kiss is a single title novel, but I might write a sequel as readers are asking me to write another story based on the same characters. This novel was initially published by Imajin Books, but I’ve since taken back my rights.

The idea behind Gun Kiss was purely accidental. I went jogging one morning, and by late evening, my legs were cramping. I couldn’t sleep, so while rubbing some heat rub, I decided to watch an old movie. The actress in the movie inspired me to create my own Hollywood character. The next day, I started working on the draft. You just never know where inspiration will come from.

Please share your setting for Gun Kiss. Have you ever lived or visited there? If so, what did you like most?

The novel is primarily set in southern California. I’ve never lived there, but I’ve been there on holiday. There are a couple of real restaurants and cafes that I included in the novel. But one fictitious place,  which I called the Mama Tacos, was inspired by the Pink Taco in Sunset Boulevard. I like the atmosphere, but more importantly I like the richness in the places I visited because I could collect an abundance of story angles.

In the novel, you’ll also find famous places like The Beverly Hills Hotel, Los Feliz, and Wukoki Ruins in Arizona. I live in a small island, and although my first novel was primarily set in Singapore, I find it difficult to write another story set on the island. So, I’m always looking to explore the outside world.

I was fifteen. I tried writing a detective novel inspired by The Hardy Boys. I didn’t get far because I wasn’t ready. I tried again when I was twenty-four, this time, working on a financial thriller. But I wasn’t going anywhere with the story. I suppose I wasn’t ready. I took a long break for a couple of years before trying it again. This time, I worked on a spy novel. I kept failing but the little voice inside me told me not to quit. And I didn’t.

I have many favorite authors. I read all kinds of books. It doesn’t matter to me the gender of the author. If the story is interesting, I’ll read it. My only wish is that I had more time to read more books.

I guess I would invite the authors who gave me blurbs for my books: Jon Land, Gayle Lynds, K.J. Howe, Jon McGoran, and Ruth Harris. All of them are suspense and thriller authors

Apart from stealing other people’s chocolates, I like to smoke shisha, the Middle Eastern smoking contraption. Fermented apple is my favorite flavor. I don’t do it at home, but there’s a café across the Malaysian border that I frequent. Although the café has a local name, I call it The Titty Twister after Quentin Tarantino’s movie From Dusk till Dawn. The reason is because it’s located in an obscure and dark place, almost vampirish. It’s not a wild place although there’s a band playing, but it feels surreal. Hey, I’ve got a wild imagination.

Oh, don’t get me started; I don’t know where to begin. Here’s one: When the staff at a café in Singapore were moving a refrigerator, they found a plate under it. On it was a lump of hair, some dried flowers and herbs. Someone was trying to hex the café business… someone who really hates the owner.

Get a good editor, be humble and listen to advice… don’t give up, even if it looks bleak. From bitterness comes sweetness. 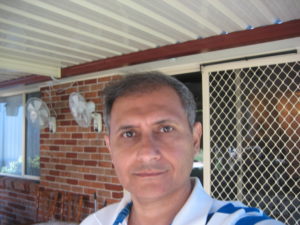 Khaled Talib is a former journalist with local and international exposure. He has authored three thrillers since 2014.

His debut thriller, Smokescreen, was listed as one of the six “boundary-breaking indies” in 2016 by the IndieReader. His second novel, Incognito, won the Silver Award for the AuthorsDB Book Cover Contest 2017. Gun Kiss is his third novel.

Khaled, who is also a member of the International Thriller Writers, resides in Singapore.

Khaled Talib will be awarding an Amazon Fire 7 8GB tablet to a randomly drawn winner via rafflecopter during the tour. The prize is limited to U.S. and Canada only.