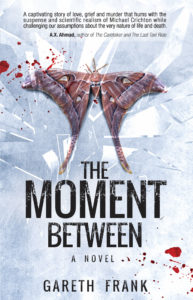 After four years of mourning, Doctor Hackett Metzger is determined to stop letting his wife’s death control his life. He is finally beginning to live again, but his recovery leads to an unexpected fight for his own survival and startling revelations about what happens to all of us in The Moment Between.

Hackett, a brilliant neurologist, is a skeptic. He doesn’t believe he will one day be reunited with Jean, or dwell with God in heaven. What he does believe is that he should have seen the warning signs of her heart attack; he should have saved her. He also cannot accept the possibility that his clinical study of near death experiences could prove the existence of a conscious afterlife. When Hackett falls for the mother of a patient, grief finally begins to fade. But he has no idea his new love is hiding her dangerous past. Will Hackett’s damaged spirit endure another heartbreak?

Yu Lai’s eyes radiated sadness, and there was a slight tremble in her lips. Hackett could see her trying to flush out her emotions before speaking.

“Nobody really knows what death is, when it starts or when it is complete,” she said. You and I both know the body dies gradually. Under the right circumstances, someone whose brain stops functioning and whose heart stops beating can be brought back to life an hour later, even more. The cells of the brain don’t just die the second blood flow is cut off.”

“What are you saying, Doctor? Are you advocating that we outlaw transplants?”

“No. You know I’m not. I guess I was just spooked by the way her arms lifted up. It was clear that Mrs. Carrollton wasn’t coming back, but I don’t know if she was truly and totally gone.”

Hackett wanted to yell, wanted to shut her up. Death was death. When the brain died, the conscious mind went with it. Hackett had learned the hard way that it was better to face that fact.

Welcome Gareth Frank! Please start off by telling us a little about yourself.

I spent thirty years as a union organizer and administrator. It was a very rewarding career, where I felt like I was making a difference for people and helping make their lives a little better. I retired seven years ago without a real plan for what was to come. When people asked me what I planned to do in retirement, I said I was going to write a novel. I figured if I said it aloud I was more likely to follow-up. It worked. I am now writing my third novel and loving it. Sometimes I wonder why it took me so long to get started, but I honestly think I would have given up if I had tried earlier in my life.

Is The Moment Between a single title, or part of a series?

The Moment Between stands alone. I like to explore new themes, new subjects, new characters and even new genres. I doubt that I’ll ever write a sequel, but then again, that could be a new adventure as well.

Steven King once said:  “(The writer’s) job isn’t to find ideas but to recognize them when they show up.”

For me, the idea for my novel showed up in the mail. I received a Christmas card that mentioned the death of a friend’s brother and alluded to his wife being the murderer. A very strange Christmas card, indeed. I couldn’t stop thinking about it. When I called my friend and asked what had happened. I found out that, as they say, fact was stranger than fiction. I used the women in question to create one of my characters. Some people think I created a monster. The truth is, real monsters are often real people. That was the genesis of my storyline.

The theme of my book grew out of my fascination with near-death experiences, and what they tell us about the conscious mind. Polling has shown that about 70 percent of Americans believe in some sort of afterlife. We all struggle between two competing natures, the logical and the spiritual. Where we lie between those two points largely defines who we are. That dualism lies at the heart of my book.

The Moment Between is a psychological thriller that brings death to life.

Please share your setting for The Moment Between. Have you ever lived or visited there? If so, what did you like most?

My story is set in Washington, DC and Bethesda, Maryland. I have lived in Washington, DC and the surrounding area for most of my adult life. It’s a great place to live and work — the political scene is fascinating. The city is lovely, but it also has its share of grit which lends to a good setting. The music is great. The restaurants are varied and top-notch. The only problem is that it takes some effort to get out of the metropolitan sprawl. I also love Tuscany, so I threw in a chapter in Italy for the hell of it.

I think I have already answered this, but I would add that I wasn’t a strong writer in school. My writing didn’t improve until I started to read more for pleasure than education. Over the years, my technical writing improved and I only dabbled with fiction a very little bit. When I retired, I not only found the bug hiding inside, its bites caused my skin to swell.

The first author I fell in love with was Kurt Vonnegut. After college, I concentrated on non-fiction by authors like David Halberstam and Hedrick Smith. I don’t have one favorite fiction author, but over the last few years, some of my favorite authors have been Fredrik Backman, David Wroblewski, Jeffrey Eugenides and Chris Cleave.

Maryann McFadden, my fellow author at Three Women Press, she knows my writing well, and has a great perspective on writing.

Chris Cleeve, because he has a way with drama and suspense that I love.

The hobby that I spend the most time on is volleyball. I have even spent time playing on the beaches of Mexico with a number of professional beach players. I am not nearly that good, but they have pity on me.

I was in the operating room for my son’s cesarean birth. Seeing your son cut from your wife’s belly then rising like a scene from The Alien is a sight you will not soon forget.

There is no better advice than the simple direction to write and read as much as is possible under your own personal circumstances. Everything flows from that. Of course, a little guidance goes a long way, too. I took some writing courses at the Writer’s Center in Bethesda, Maryland, and worked with a great independent editor, John Paine. Both were invaluable experiences.
~~~~~~~~~~~~~ 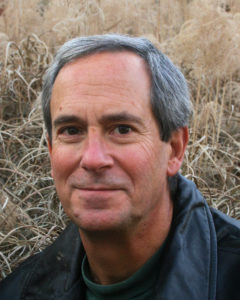 Gareth Frank is a former union organizer and administrator. He received a Master’s Degree at the University of Wisconsin and later studied at the Writer’s Center in Bethesda, Maryland. The Moment Between is his first published novel. His short stories have been published in various journals and have been nominated for the Pushcart Prize as well as the Silver Pen Write Well Award.

Gareth Frank will be awarding a $50 Amazon/BN GC to a randomly drawn winner via rafflecopter during the tour.