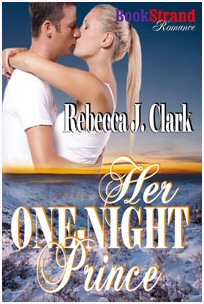 BLURB:
Her One-Night Prince is a Cinderella story about a woman’s dream to be something she’s not for just one night at her class reunion.

Shy and sheltered Lydia St. Clair is uncomfortable around men, so she advertises for a gay man to be her date and revamp her style. Mitch Gannon answers Lydia’s ad and he’s perfect for the job–he’s handsome and, even more important, he’s charming.

Unbeknownst to Lydia, Mitch is straight and answered the ad as the unwitting victim of a practical joke. Before he can reveal the truth, Lydia is convinced he’s her fairy godmother, ready to transform her into the belle of the ball. And Mitch, prince that he is, doesn’t have the heart to set her straight.

With a firm hand against her upper back, Mitch propelled Lydia out of the bar and out the door. She peered back through the windows and could just make out that waitress standing behind the bar and staring out at them.
“She’s beautiful,” she said, turning back to Mitch. Something about that woman signaled a déjà vu of sorts in her mind, but she couldn’t quite put a finger on it.
“Who? Edwina?” He glanced into the pub. “Yeah, she is.”
Edwina’s showstopping figure and stunning looks caused Lydia to self-consciously smooth back her boring, pulled-tight-into-a-bun-as-usual hair. She couldn’t imagine a woman like Edwina ever advertising in the gay personals. She couldn’t imagine Edwina making a boob of herself by assuming Mitch worked at a gay bar.
With the heel of her palm, she bonked herself in the side of the head a few times. “Just shoot me, will you?”
Mitch pulled her hand away from her head. “You’re too hard on yourself, Lydia.”
For a moment she zeroed in on the feeling of his large, warm hand holding hers. It felt good, like it belonged there, which was a crazy thought. Reality returned, and she pulled her hand from his grasp.
“What in the world was I thinking?” she asked. Her skin burned from embarrassment, or the heat of summer, or his touch…or all the above.
“It’s understandable you’d assume I worked at a gay bar. I mean, you think I…er…”
She waved her hand back and forth. “No, no. That was just plain stupidity. What I meant was, I had this grand notion of you helping me out and transforming me into the belle of the ball. You know, Queer Eye my style or something.” She wrapped her arms around herself despite the warm air and strode down the alley. If a sinkhole opened up in front of her, she’d gladly fall into it.
He jogged up beside her as they reached the sidewalk. “I don’t know about the clothing and hair stuff,” he said, “but I could certainly give you advice on men.” He cleared his throat and coughed. “I mean, since I’m a, ah, man.”
“That’s okay. It was a dumb idea. Besides, I don’t want advice on men. It would be pointless.” She pulled black-framed sunglasses from her purse and exchanged them for her regular glasses to block the blinding glare off the sidewalk.
Mitch didn’t respond right away, so she knew he silently agreed with her. Finally, he asked, “Why would it be pointless?”
She had about a million reasons. “It just would be.”

Where you the kid that everyone made fun of growing up?  Were you not part of the cool crowd?  Lydia was the kid that everyone made fun of at school.  When she receives the invitation to her class reunion she decides that she is going.  She’s needs a makeover and decides to advertise for a man, a gay man, to help her with her transformation.  What she gets is a very straight, sexy and great guy in Mitch.

Mitch is the guy that you want to date, marry and generally hang out with on a daily basis.  Problem is that he doesn’t directly answer the ad, he friend Hal does.  When Mitch realizes what Lydia wants from him, he can’t deny her.  He instantly likes her and wants to help with her transformation.  What Mitch didn’t count on was falling in love with her.

Lydia is definitely a fish out of water.  She really does have a heart of gold and a great girl.  She just has no self confidence with herself.  Lydia is a character that is instantly likable and you are totally rooting for her.  She has the self confidence but it takes some bumps and bruises with Mitch for her to realize that.


I loved this book.  The secondary characters are brilliant in the fact that they enhance the story and make Lydia and Mitch step back and take a breath.  Its a sensual book and you can feel the chemistry from Lydia and Mitch’s first meeting.  Lydia is a girl that I was in high school in some respects.  She is always a person that I would have been friends with and defended to the mean girls.  Mitch didn’t know what to really think of Lydia at first, but he soon realized that he couldn’t be without her.


I highly recommend Her One Night Prince for anyone that was the “made fun of kid” in school or the kid that did the teasing.  You might learn something from one another.

Rebecca Clark has wanted to write romance novels since she read her first Harlequin Romance at age 11. When she’s not writing, she works as a personal fitness trainer and group exercise instructor, where she teaches Pilates, Turbokick®, Zumba®, and yoga. She makes her home in the Pacific Northwest with her husband of 24 years, two kids, a German Shepherd beast who thinks he’s a lap dog, two cats, two rats and a gecko. In her not-so-abundant free time, Rebecca enjoys reading, watching Criminal Minds reruns on TV, and doing absolutely nothing.

10 thoughts on “Her One-Night Prince”

Leave a Reply to Planning a Cancel reply