Cold In The Shadows is the fifth book in the bestselling, award-winning
COLD JUSTICE SERIES by Toni Anderson. 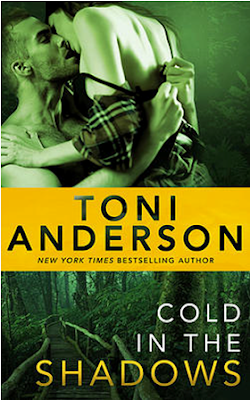 Cold In The Shadows
BOOK INFORMATION:
Release Date: Nov 24th, 2015
ISBN-Print: 9780993908996
ISBN-digital: 9780993908989
BLURB:
CIA Officer Patrick Killion is on a secret mission to hunt down the ruthless female assassin hired to kill the Vice President of the United States. The trail leads him to the Colombian rainforest and an earnest biologist, Audrey Lockhart, whose work on poison dart frogs gives her access to one of the deadliest substances on earth—the same substance used to murder the VP.   When Audrey is attacked by the local drug cartel, Killion steps in and hustles her out of harm’s way, determined to find out what she knows. His interrogation skills falter somewhere between saving her life and nursing her back to health as he realizes she’s innocent, and he ends up falling for her.
Audrey has a hard time overlooking the fact that Killion kidnapped her, but if she wants to get her life back and track down the bad guys, she has to trust him. Then someone changes the rules of their cat and mouse game and now they’re the ones being hunted—by a cold-blooded killer who is much closer than they think.

COLD JUSTICE SERIES:
The bestselling, award-winning Cold Justice Series centers around agents from the FBI’s Behavioral Analysis Unit-4 (crimes against adults), and spin-off characters from the books. Each book stands alone with a different hero and heroine being the focus of the story. Characters crossover so readers might get the best experience by starting at the beginning!
Books from this series have won the New England Readers’ Choice Award, the National Excellence in Romance Fiction Award, the Heart of Excellence, the Aspen Gold Reader’s Choice Awards, and Book Buyers Best Award for Romantic Suspense. 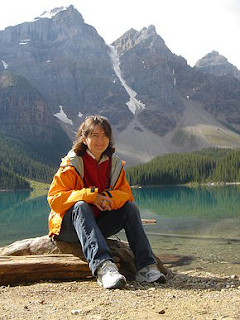 
A former Marine Biologist from Britain, she inexplicably ended up in the geographical center of North America, about as far from the ocean as it is possible to get. She now lives in the Canadian prairies with her Irish husband and two children and spends most of her time complaining about the weather.


Toni has no explanation for her oft-times dark imagination, and only hopes the romance makes up for it. She’s addicted to reading, dogs, tea, and chocolate.


If you want to know when Toni’s next book will be out, visit her website (http://www.toniandersonauthor.com) and sign up for her newsletter. If you want to read other fascinating stories about life in a city that, during winter, is sometimes colder than Mars, friend her on Facebook: (https://www.facebook.com/toniannanderson).


Toni donates 15% of her royalties from EDGE OF SURVIVAL to diabetes research–to find out why, read the book!

According to Patrick Killion’s favorite data analyst at the Agency, he was a half-inch short of being the perfect romance hero. As long as the inch she was talking about was his height and not his dick, he didn’t give a rat’s ass.
Today, at a measly
five foot eleven and a half inches, he towered above the locals. His height, combined with his sun-bleached blond hair, meant he definitely did not blend in with the Colombian population. He didn’t bother to try.
The CIA dealt in threat assessment and probability levels, manipulation and human intel.
Lockhart’s appearance, expertise, hidden Cayman Island bank account, and the fact she was in the right place at the right time for Vice President Ted Burger’s murder, made her his number one suspect. So, despite FBI ASAC Lincoln Frazer telling him to back off yesterday, he was still following her. He couldn’t walk away.
Last night he’d shaken the tree to see what fell out.
He ignored the twinge to his conscience. He’d been a little rough. He hadn’t wanted to risk her getting the drop on him. He had given her a get-out-of-jail-free pass and probably saved her life—that should count for something.
Except she hadn’t behaved as she should have. She hadn’t called her employer. She hadn’t grabbed a bag and run. Instead she’d reported the assault to the local cops and had gone in to work today. Maybe she’d been busy destroying evidence or delaying until the last possible moment before she made a mad dash for some small private airfield. Maybe she was overconfident about her abilities. Or maybe she was innocent.
It was the last “maybe” that bothered him.
As he stood in line for a ticket to the ecological park, a pretty redhead in a strappy top and high-heels eyed his neon orange T-shirt and red plaid shorts with a distasteful grimace. He’d committed a class-A felony and the fashion police were about to convict.
“Airline lost my luggage.” Killion raised his palms in a pitiful shrug, putting enough misery into his travel-worn appearance that the woman’s expression immediately shifted from disgust to empathy.
“That blows. How long ago?”
“Two days now. They swear they’ll get it to me sometime today—”
She gave a disbelieving snort. “Yeah, they once lost my luggage on a trip to Mexico and by
the time it arrived I was getting on the plane home. Worse, they refused to reimburse all the clothes I needed to buy…”
Off she went, and he was in. Phase one of this mission accomplished. He walked into the conservatory
as part of a group of American tourists, rather than as a single white guytraveling alone. They milled loosely about, looking at Lepidoptera specimens that fluttered about like giant-sized pieces of confetti.
A family of seven—five women who all looked like they’d rather be at the mall, an older man, and a teen who read every piece of information like he was cramming for a test. Killion stayed close to the stacked redhead because he looked like the kind of guy who’d stay close to a stacked redhead, but he also chatted to the others in the group, gleaning information. They were down from Florida, visiting family over Christmas. The Americans had arrived in a large minivan with an armed driver, but the driver stayed with the vehicle so they weren’t
too worried about security. In this country, staying in one spot for any length of time meant you attracted attention—and not the, “Oh my, don’t you have pretty eyes” kind of attention.
It wasn’t a good thing.
Hot sun bore down on the forest canopy that shaded the ecological park. The small interpretive center affiliated with the Amazon Research Institute attracted local schools as well as the occasional tourist, but it was Monday, January 5 and schools were closed until after Epiphany. The place was deserted except for this little band of intrepid explorers. The ground steamed and sweat beaded on his skin as his adopted people wandered slowly from enclosure to enclosure. A rivulet of perspiration soaked into his shirt.
A huge yellow butterfly drifted over his head and landed on a piece of cut fruit on the feeder tray. The redhead barely contained her squeal of excitement and took twenty pictures with her little point-and-shoot. Killion’s point-and-shoot dug into his spine and held fourteen rounds. Their group finally headed into the
amphibian enclosure where decaying damp earth mixed with traces of ammonia, and the musk of rotten leaves.
Welcome to the jungle.
His new friend grabbed his arm, pointed. “Aren’t they cute!” A minuscule, neon-yellow frog was stuck on the side of a glass tank.
“They may look cute”—said a familiar voice with just the barest hint of a Kentucky twang—“but one golden poison dart frog contains enough toxin to kill ten-to-twenty grown men.” Dr. Lockhart wore spectacles on a string around her neck and reminded him of the class nerd—the one all the guys had secretly lusted after but had been
too intimidated to ask out on a date. The professor had unusual violet-blue eyes that showed clear signs of a sleepless night. He would have felt guilty, but more than one person had told him he was a heartless bastard who didn’t have a conscience. A sociopath by any other name.
He didn’t give a shit, so they were probably right. Hell, she should be thanking him. Being tied
up and threatened sure beat the hell out of a trip to a Black Camp or a lifetime in prison—and those were the more civilized options.
Audrey Lockhart wore ubiquitous jeans over Birkenstocks and a tight white tank top that molded her breasts in a way that left little to Killion’s undeniably vivid imagination, all topped off with a thin purple shirt that she left open. She wasn’t carrying a weapon—unless she had a frog in her pocket. “I’m Dr. Lockhart, I study anurans and my specialty is the family Dendrobatidae—poison dart frogs.”

For all intents and purposes she appeared to be exactly what she said. A scientist, dedicated to
her research. He rarely trusted appearances. That’s what data analysts, surveillance, and background checks were for—not to mention interrogation.
“I thought captive ones weren’t poisonous?” Killion pointed to a little guy about an inch long that was sitting at a precarious angle on a large green leaf. The creatures didn’t look real—they looked like miniature plastic toys. They certainly didn’t look like the deadliest creatures on the planet. He placed his hand lightly on
the redhead’s back, and she sank against him, proving her taste in men was as terrible as his taste in clothes.
The professor’s eyes ran over him and his new squeeze, then away, dismissing him as just another tourist.
She didn’t recognize him from last night. There was no obvious guile in her gaze. No deception.
“You’re right in that individuals bred in captivity have no toxicity, but these specimens were
pulled straight from the nearby rainforest where they are endemic and, trust me, you wouldn’t survive a close encounter.” Her voice was husky, sexy enough to raise his awareness of her as a female rather than a target.
He’d always had a thing for voices. And nerds.
She continued, growing more serious, “It takes years for them to lose their toxicity, and even touching a paper-towel that has been in contact with the skin of these particular individuals can kill you. They are extremely dangerous.”
“Death by frog.” His smirk didn’t reach his eyes. “Bet that ain’t pretty.”
The redhead laughed. The professor did not.
“We’re very careful how we handle them.” She looked stern now, like she was the teacher and he was the naughty schoolboy. And there was his vivid imagination going nuts again.
“Have you ever seen someone die after touching one?” asked his new friend.
“Thankfully, no.” The professor’s gaze was open and sincere.
What did he expect?
Skull and crossbones instead of pupils? He’d been with the Company long enough to spot an operative with one quick glance, but this woman was an enigma. Either she was an incredible actress, or he was way off base in his assessment of the facts. Hell, maybe she was just another enviro-nut trying to save the planet—or, in this case, frogs.
“Do they taste like chicken?” he joked.
Those violet-blue eyes flashed. “I don’t know,” she bit out. “Would you like to try one?”
Ouch.
Her fiery response was hot as hell, but obviously she didn’t appreciate his sense of humor—he’d been told it was an acquired taste. He didn’t look away, instead used the opportunity to study her carefully. Her gaze was determined, but he could see fear at the edges—from the scare he gave her last night? Or did she live in constant fear, waiting for her time between the crosshairs? He didn’t figure being an assassin was particularly good for your long-term health. Someone, somewhere was always trying to tie up loose ends.
MEET THE COLD CREW

3 thoughts on “Happy Release Day to Cold in the Shadows (Cold Justice #5) by Toni Anderson w/Playlist!”