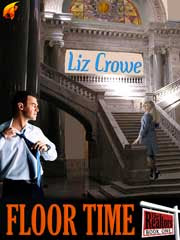 
UPDATE AS OF MONDAY, FEBRUARY 13, 2012.  LIZ WILL NOW BE OFFERING TWO (2) SIGNED COPIES.  STAY TUNED…WINNERS TO BE PICKED TOMORROW.

Jack Gordon is Ann Arbor’s most delectable bachelor. At age thirty-five, he’s made millions as a top-selling Ann Arbor real estate broker and has the right connections to close a deal by any means necessary. With his rugged good looks and compelling personality, he has a virtual black book most men would kill for and he uses it often, never settling for one woman for very long.
While his D/s past remains buried, exactly where he wants it, an undercurrent of boredom and dissatisfaction runs through his life now. A disastrous experience years earlier made him swear off the whole scene, but the more Jack suppresses his natural Dom, the more his frustration grows.

Sara Thornton, a rookie in the real estate game, has fast-tracked herself to the top of the Ann Arbor market. Her life reflects a disciplined and focused routine, exactly the way she wants it. However, as her career takes off, the fulfillment she seeks remains inexplicably out of reach. The one thing she knows for sure, she will not join the Jack Gordon groupies in her company, no matter how tempting that might seem.

A chance encounter, then a difficult transaction, throw Jack and Sara together and the sparks fly high and hot and often. Forced to confront the compulsions that gain momentum with each sizzling encounter, their relationship seems to spiral out of control until Jack finally admits what he needs, and shows Sara what she’s been missing.

I dare you to read any book of Liz Crowe’s and not fall in love with her, the author.  I dare you, in fact, I triple dog dare you.  If you have never, ever read a book by Liz Crowe, go now, buy a book, any book of hers and savor it.  Devour it, re-read it and then buy another.  You get what I’m saying?   I’ve actually reviewed her entire Turks Trilogy on my blog.  Okay, enough of the Liz love.  This is supposed to be my review of Floor Time and I’m really at a lose to how to start.  So here goes…

Take two selfish people, add a dash of competition, a dollop of lust, two cups of trust issues, stirring in that one person is dominating and one person is not fully willing to submit and what do you get?  Floor Time by Liz Crowe.
Jack Gordon is the uber, dominant male.  He is sexy, flawed, has fears, can basically snap his fingers and women flock and doesn’t believe in love anymore.  Once bitten, twice shy.  He’s problem with that is he wants to put his past behind him, yet that perfect woman has eluded him.  That is until he meets his match in every way…Sarah Thornton.  He’s need to dominate slowly re-emerges and the attraction between Jack and Sarah is instant and often.  Unfortunately, that attraction isn’t without problems.  Lust, sex and attraction between them aren’t the problem; learning to trust and letting go is the problem.
Sarah Thornton is the most independent, career focused woman that I have read.  She’s so focused that she has lost sight of any type of close relationship with people.  From their first coupling (***needed a hose and still fanning self), she slowly realizes that submitting to Jack is the ultimate power play in her life.  She does however, struggle with trusting Jack fully and can’t see past her independence to give herself over fully to Jack.  I sometimes struggled with Sarah.  I felt myself identifying with Sarah more than I cared to and it brought forth some issues that I had when I was dating my now husband.  It was a very rocky road for us and it will be a rocky road for Sarah, too.
I will admit that read their story twice and will re-read it again.  Their love and attraction for each other is fierce and off the charts.  If you are looking for a sweet story, this is not for you.  You will read one of the most gut wrenching, emotional, off the wall sexy and utterly exceptional stories that will leave you wanting to read more about Jack and Sarah and the road that they take with each other.  Their struggles are between themselves and with one another and getting there in the end will not be without problems and doubts.
I really urge you to pick up Floor Time and read about Jack and Sarah.  The beginning of their journey together is one of the most emotional filled stories that I have read in a long time.  I look forward to reading about their journey together soon.
***Did I mention that the sex is beyond hot and you will need a hose? *** Oh wait; if you’ve ever read Liz, then you already know that, right?

5 Harlie’s and a Highly recommend read.