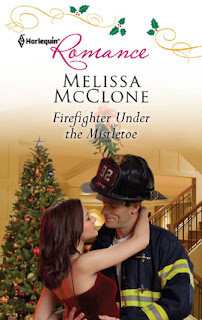 Firefighter Under the Mistletoe
Harlequin Romance
Back of the Book
Christmas magic in Hood Hamlet…For Leanne, infuriatingly charming firefighter Christian Welton is out of bounds. Not only is he too young for her, but his trail of broken hearts is legendary. Leanne’s fought hard to be one of the boys, and won’t let anyone see that Christian’s smile makes her want to melt into his arms!

Christian wanted to discover the softer side of the tough-talking paramedic, but hasn’t counted on how much the real Leanne affects him. He’s vowed never to settle down, but under the mistletoe it’s certainly the season to be tempted….

I read this book in one sitting. I was completely swept away in the first chapter when Leanne rescues Christian and his cousin Owen after a climbing trip goes bad. Leanne and Christian work together in Hood Hamlet. She is a by the book paramedic and he’s the rookie firefighter. Throw in that she’s older than him, she has worked hard to be one of the guys and she won’t admit that she does have feelings for him, it makes for a great story. Christian is from well to do family that has a winery. He’s heart is being a firefighter not a wine maker.

I will admit that I have read Sean Hughes and Zoe Flynn’s story (Christmas Magic on the Mountain) and the online story featuring Cocoa Marsh and Rex Billings (Snow Kissed Reunion-its on the Harlequin website) but I have not read Carly Bishop and Jake Porter’s story Rescued by the Magic of Christmas. I plan on reading it within the next few weeks. Leanne has also been a secondary character in each of them so when I read that she was getting her own book, I was thrilled. I knew that Leanne would be a tough nut to crack but Christian was up to the task. From the moment the book opened to the moment that I shut it closed, I sighed, laughed and fell in love with both of them.

Ms. McClone has written a beautiful and emotional story of two people that are finding their way in the world and finding out where they belong in it. Its also the story of family and what defines a family and your place in a family.

Leanne and Christian have sizzling chemistry from the start and it only heats up during the story. Half the fun of a Harlequin Romance is the build up of chemistry through out the story and the gratifying HEA at the end. One thing about this series…will there be more? I love Hood Hamlet and the people that make up the town. Their journeys toward love and family never cease to amaze me.

I highly recommend each of the Hood Hamlet Christmas stories. I read mine in order but each stands alone.

4 thoughts on “Firefighter Under the Mistletoe by Melissa McClone Review”