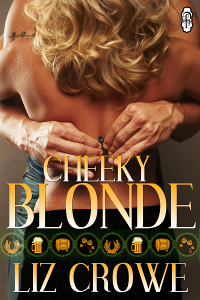 Harlie is pleased, no, honored to have Liz Crowe on the blog today with Cheeky Blonde.  If you have not checked out her books, you are missing out.  Take it away Liz…
Why Beer?
Why not…I mean, I know I can say this here because my host is a Shiner Fan!  Yes, she is.  Love it!  They have a new one out, too.
Craft beer is my world, and the setting for Cheeky Blonde my latest release from Decadent Publishing.  It starts at a national beer fest (there is one: it’s called the Great American Beer Festival and it rocks), when the heroine meets her “hero” who seems a little unlikely since she claims can’t anything about him that doesn’t start with “that asshole.”
Seems like a fairly traditional set up. But I promise it’s not.
Like most of my books , Cheeky Blonde has elements of what you expect, but a lot of what you don’t.
And because I say “why not beer?” I set it in my world. I won’t bore you with tons of brewing and mundane details but will show you a high-speed romp in a non-traditional setting that’s sexy, and funny and introduce you to one of my favorite new heroes: Sean Garrison, marketing director and founder of the Garrison Brothers Brewing Co. a fictional company in Lansing, Michigan.
Here is a taste of Sean:
“Christ,” he muttered, as he snatched his phone from the floor. Nearly nine a.m. already. He had appointments with distributors in an hour and had to be at some round table thing about marketing at noon, plus another panel discussion regarding the antiquated three-tier distribution system later in the afternoon. To top it off, he was gonna have to jack off in the shower thanks to whoever the hell was yelling his name outside. His head pounded in time with the fist.
“Cool your jets. I’m coming.” He yanked open the door and came face to face with the woman he had only a second before imagined sucking his cock. Her beautiful face was dark with anger.
He made an effort to fix his smirk in place, but his head spun from a combination of too little sleep, too much alcohol, and an intense emotion he had spent the last several years avoiding at all costs. The mix of regret and pure unbridled lust made him grit his teeth.
“You are a colossal asshole,” she said, her jaw tense. He raised an eyebrow. It wasn’t the first time a beautiful woman had said as much.
“Look at this.” She shoved her phone in his face. He leaned back, unwilling to admit he needed reading glasses to see the small screen. “Oh shit. Never mind, I’ll read it to you.” She yanked the device out of his hand.

“What the fuck is a ‘hash tag?’”
She glared at him. “Don’t be obtuse. Wait, it gets better.”
“Sean and Jenny sittin’ in a brew house, K-i-s-s-i-n-g hashtag brewingconventionsex hashtag whereisdylan?”
“I hate Twitter,” was all he could muster.
Cheeky Blonde:
Blurb
Violence, intrigue, and passion are brewing in the craft beer world. When bitter rivals Jennifer Baxter and Sean Garrison meet, the notorious and handsome owner of Garrison Brothers Brewing stays true to form, seducing his rival at a national brewer’s convention.

Sean arrived at the convention expecting to get down to business, including his stated goal of hiring Jen away from Brick Street Brewery. But the beautiful fellow craft beer expert provides more of a distraction than he expected.

When sabotage strikes their fellow breweries, they unite to solve the mysteries. But fate and rumors brew more than beer as love, lust, jealousy, and misunderstanding collide in a way neither could have expected or anticipated.
Can they overcome the malicious chatter long enough to explore the emotion bubbling beneath the surface? Or will lust fall flat and leave them nothing but memories of the moment that slipped away?

Why did the book have to end?  I mean really?  Could Liz have written a longer book about the beer business, hot sex and had a great suspense element woven in?  I know that she has written longer and I’m really hoping for a sequel of sorts.  Okay, rant over.  On with the review.
I will admit that I’m partial to Ms. Crowe’s beer books.  My brother worked in the bar business and then beer business for over 15 years so I’m well versed in the basics of brewing, marketing and the tasting of beer.  I love beer myself but sadly, can’t drink a lot of it anymore.  Health issues you see.  I’ve waited for at least 6 months for this book to come out and I was not disappointed.  It had everything I like in a book.  An engaging plot from the start, great sexual tension build up and the suspense element that was woven in was spot on.
Jen Baxter is an up and coming brewery owner that has a great reputation in the business.  She a man in her life, sort of but once she sees the rock star of the beer business Sean Garrison, her life will never be the same.  While trying to fight her attraction to Sean at a beer festival and keeping her wits about her, she is also trying to keep the green eyed monster at bay.

The scenes that took place at the festival were hilarious.  Who knew that you could have that much none sex but still feel the sexual tension build up between two characters?  Some of the best scenes with Jen and Sean were when they were NOT having any kind of sexual anything but the teasing, torture and flirting.  Liz does a spectacular job of this with Jen and Sean.  Yes, they are not celibate, there are other ways but the build up towards them in bed is spot on with me.  Once you finally get there, it’s totally worth it and heartfelt.

The secondary characters flew off the page for me.  They only enhanced the story and moved Jen and Sean along to their ending.  I really felt for Dylan throughout the whole book.  That said the scenes with Dylan and Julie are great.  Do not skim over the scene at the brew house when they get home from the festival.  Trust me.  I couldn’t decide whether to squirm in my seat or laugh out loud.  You figure it out for yourself.  Liam, Sean brother is important to the story, too.  As Sean’s sounding board and business partner, he has a stake in this, too.

The suspense element that Liz wove into the plot was interesting.  Do not skip these scenes.  They explain what is happening in the background with the saboteur and how it will all play out in the end.  Plus, you might learn a thing or two.  I sure did.

Overall, I loved this book.  My biggest complaint was that I wish it were longer or that a sequel is coming.  Yes, this book is over 141 pages but I’m greedy.  J  Jen and Sean are two people that I could sit down with at a bar and become friends with over their competing beers.  I felt connected with Jen, Sean, Dylan and yes, Sean’s ex-wife Victoria.  Run, don’t walk to buy and read Cheeky Blonde.  You will glad that you did.
5 Harlie’s and a highly recommended read
Buy links:
Amazon: http://www.amazon.com/Cheeky-Blonde-ebook/dp/B008HIVJQG/ref=sr_1_1?ie=UTF8&qid=1342789305&sr=8-1&keywords=cheeky+blonde
ARe: http://www.allromanceebooks.com/product-cheekyblonde-861962-149.html
Smashwords: http://www.smashwords.com/books/view/179345

Otherwise, look for her doing pounds of laundry for her athletic children, watching La Liga on the Fox Soccer Channel, or trying to figure out what to order in for dinner. Liz loves her Foo Fighters Pandora station, and watching reruns of Deadwood, when there isn’t any decent sports on the telly (like during “golf season”).  Her beer blog a2beerwench.com is nationally recognized for its insider yet outsider views on the craft beer industry. Her books are set in the not-so-common worlds of breweries, on the soccer pitch and in high powered real estate offices.  Don’t ask her for anything “like” a Budweiser or risk painful injury.