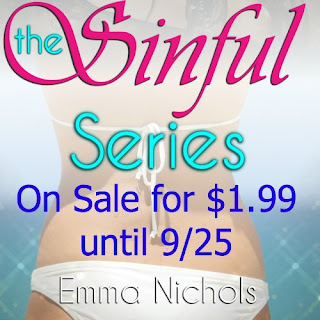 When Alysin decided to surprise her boyfriend at work with dinner, the surprise was on her. Since he was going at it with his secretary on the conference table, she packed a bag and called her BFF. Jolie and Alysin had been traveling the country, working as digital nomads for ten years ever since graduation. Taking this as a sign it was time for a new move, they decided to take a cruise, regroup, and make a plan.

Then she meets Mr. Bedroom Eyes. Following her lead, they pretend to be married so that she can rid herself of the guy who started hitting on her before the boat left the dock. Though it was supposed to be a momentary arrangement, he asks her to take it one step farther. Then another and another. The cruise promises to be memorable in every way that matters.

Along the way, Alysin learns that she won’t have to fake an orgasm if she’s with someone who knows what to do, that not all men suck, but the best ones suck really well, and that sometimes what starts out as something pretend, can fast become something completely real. Will the woman who lives life with no regrets, regret that she made that stupid rule about not exchanging names and contact info?

It was supposed to be a week of simply being, of living in the moment, and enjoying every minute while it lasted. Of course, that kind of intoxication can have lingering effects. For Sin, she found herself wanting to break all the rules, to extend her time with the stranger who stole her heart. Vegas was just the right kind of place to take such a gamble. Meeting up with BE at the gondolas was a risk. Love went against everything they had promised, but the best things in life can’t be planned.

Soon Alysin will be tested.

After guarding her heart for so long, she finally let a man in and discovered that the worst things in life happened when she least expected them. When she walked in on BE with another woman and overheard their heated conversation, she suddenly remembered there was a reason she made these rules.

Will broken rules lead to broken hearts or will she realize that though love was a gamble, she was all in?

A server stopped by the table then.  The guy was cute, I guess.  From his actions, I was certain he was used to women falling all over him.  Poor guy.  He wasn’t going to be able to flirt his way to a fat tip tonight.  I was impervious to the charms of other men and
Jolie…lesbian.

“What can I get for you, gorgeous?”  He asked, flashing a huge smile
that exposed perfectly white straight teeth.

“Just a Coke for me,” I said.  Then I turned my attention once more to Jolie.

She rolled her eyes so hard, her entire head bobbed.  “Please.  And we need some Irish Nachos…extra sour cream.”  She studied the appetizers a moment more before shrugging and conceding.  “And that should do it…but I reserve the right to order a brownie sundae later.”  She nodded and smirked.

My eyebrows rose.  “A brownie sundae?  Since when?”

“Since you are in mourning,” she announced.

“I’m not in mourning!  What do I have to be upset about?  We just returned from an amazing cruise.  I had some of the hottest sex of my life.  And I’ll be seeing him again in a week!”  I crossed my arms over my chest.  “We’re starting a new adventure.  Life is good.”

“Yes, life is good, but you don’t really believe that.  This is why you are so out of sorts.  You are having doubts.  I can see it.”  She frowned at me.

“How would you know?”  I sniffed.  “I never have doubts.  I am the picture of confidence.”  I leaned back in the booth in an attempt to project a picture of calm and cool.

She laughed at me then, a big hollow sound, the mocking one.  “I’ve known you forever.  The last ten years it has been the two of us and your flavor of the month.  This guy, BE, he’s not a flavor of the month.  BE is the spice of life.  You know it, and I know it.  I know how unsettling this is for you.  Just know that he won’t let you down.  He’s not going to stand you up.  You can focus on doing what needs to be done and soon, you will be together again.”

“We’ll see,” I said with a shrug, trying to brush it off like it didn’t matter.  Oh, but the girl in me wanted to beg Jolie for more…more reassurance, more pretty words that would soothe my tortured
soul. Author Links
Facebook * Twitter * Goodreads
Bio:
What made her decide to be an erotica author?Simple.How else was she going to parlay her two favorite past times into a career?Emma is single and loving it. Like her first character, Alysin, Sin for short, she doesn’t believe in settling or in settling down. She loves to indulge in her passions whenever the mood strikes and enjoys keeping all of life’s cliche moments spicy.Known for her sense of humor, Emma surrounds herself with friends whose antics often become the source of book fodder. Her ideal situation would be to explore the Caribbean while writing. She pursues that dream daily.
Enter to Win!