Harlie here:  I’m so embarrassed.  My English Rose is one of my all-time favorite authors and people and I had to PM her to get her to send me the book for review AGAIN!  Yes, she sent it last month and I swear I saved it somewhere on my computer so that I could download it later to read.  Much to my embarrassment, I have no clue what I did with it and she graciously re-sent it to me.  Needless to say that even though the review isn’t part of my participation in the tour, I did promise to read it and post my review on the tour.  Unfortunately, I haven’t finished it.  This has never happened before and it will never happen again.  I will be updating my post with the review within a day or two.  You can always find my reviews on Goodreads under the name Harlie Williams or Amazon (Brian’s Mom).  I know that I go on and on about Ms. Brimble’s work but if you have never read her books, you really need to.  From Romantic Suspense, Victorian Historical and of course, her Templeton Cove series, there is something for everyone. 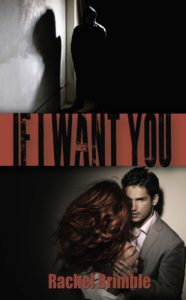 If I Want You

When local journalist, Tori Peterson, fails to prevent a child abduction outside her niece’s school, her horror and guilt sparks a vow to do whatever it takes to get little Abby Brady home to her parents.

While Tori battles the vile memories of her own kidnapping as a child, she accepts the help of widowed father, Mark Bolton. As he and Tori join forces with the local police, their attraction and intimacy grows…along with their fears for Abby.

Links are uncovered between Abby’s disappearance and Tori’s kidnapping, and Tori is forced to accept the monster who held her captive is back. But this time, Tori is all grown up, and there is no way she will let him hurt another little girl.

Sensing her discomfort, he stopped and leaned against the bureau. God, did he frighten her? Surely not, or she wouldn’t be here. Or did she sense his attraction toward her and would do all she could to deflect it? He didn’t doubt for one minute his eyes gave away his appreciation whenever he looked at her.

He lifted the can to his lips. “So, what have you been thinking about?”

She tapped a peach-painted nail on the bureau. “This.”

He frowned. “How did you know it was hers?”

“She mentioned you were working on a bureau for her when I was in the school office. I assumed this is it.”

“Good, because that makes it all the easier for me to give you your first assignment.”

She smiled, took a few tentative steps closer to him. “Got it in one, Watson.”

He smiled, pleased to see genuine mischief shining in her eyes. “I’m Watson?”

“So that makes you Holmes. Not sure I like being anyone’s sidekick.”

Another couple of steps closer until no more than a couple of feet separated them. She met his eyes and his heart kicked. Her V-neck shirt was just the right side of professional. Yet, the way it revealed her collarbones and hugged her full breasts made him want to reach out and pull her into his arms, kiss her, taste her…

He blinked and snapped his gaze from her breasts, rare heat hitting his face. “Sorry. You look nice.”

“Thanks.” She raised her eyebrows and nodded toward his chest. “So do you.”

Welcome Rachel Brimble Please start off by telling us a little about yourself.

Hi, I live near the famous Georgian city of Bath with my husband of 19 years, our two teenage daughters and fabulous chocolate Labrador, Tyler. I write mainstream romance, romantic suspense and historical romance and have written twenty-two novels and two novellas. Apart from the two currently under publisher consideration, all my books have been published and available for download.

When I’m not writing, I love to read, knit and watch far too much TV – I also love to walk for miles with my dog, friends and family as well as enjoying far too many pub lunches and chilled white wine!

Is If I Want You a single title, or part of a series?

Right now, it is a single title, but never say never! I LOVE writing series and if the right story comes along I’d happily revisit Barlington, the small English town where If I Want You is set.

What were your inspirations for the story?
A lot of my story ideas come from the news and/or magazines and this story started to form in my mind after I watched a news piece where a missing child was reunited with her parents. I tried to imagine how her poor parents and the little girl felt when they were separated, what they were thinking, wanting to do. Before I knew it, I’d put myself in the position of the parents, the child and her abductor and the words and situation started to flow.

I was a little worried about writing a child abduction into a romantic suspense for fear it might put potential readers off, but I’ve handled it as sensitively as possible and the romance helps to soften the crime element.

Please share your setting for If I Want You. Have you ever lived or visited there? If so, what did you like most?
The town’s name of Barlington is completely fictional, but in my mind it is based on a small town near where I grew up in Bristol. There is one particular scene when the hero and heroine revisit a wooded area where she played as a child – the wood and the street around it is an actual place where I played and longed to live, but the area was so much more affluent than my parents could’ve afforded at the time.

A very long time ago when I was eight or nine! Life happened and I took a VERY long break until my youngest daughter started school full-time and I had a ‘now or never’ moment. I started to write my first novel which the Wild Rose Press published in 2007 (Searching For Sophie). Since then I have had at least one book published every year.

See above as well as crime novelists Alex Grecian and Tess Gerritsen to spice things up a little!

Do you have any hobbies or special things you like to do in your spare time?
My absolute favorite thing second to writing is knitting! I’m addicted! Since I started about ten years ago, I now find it impossible to watch TV and not knit so I combine two of my favorite things and relax every evening ☺

The eeriest thing I’ve ever had happened, which was also a blessing, is when I had my eldest daughter she would have times of crying and no matter what I did, I couldn’t stop her. Whenever I was pushed to the end of my patience and the tears started to well in my eyes, she would suddenly stop and watch an invisible something as it moved about the room. Her tears quickly became laughter.

I really believe she was seeing my husband’s grandfather who has often been ‘felt’ by other members of the family. He was a massive part of the family and a huge character who would cheer everyone up when they were sad.

Write! Far too many aspiring writers dream about writing but don’t actually do it – another thing is not finishing a piece of work. Get it done and send it out to agents and publishers, it’s the only way it’s going to happen. 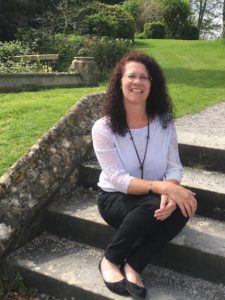 Rachel lives with her husband and two teenage daughters in a small town near Bath in the UK. After having several novels published by small US presses, she secured agent representation in 2011. Since 2013, she has had seven books published by Harlequin Superromance (Templeton Cove Stories) and an eighth coming in Feb 2018. She also has four Victorian romances with eKensington/Lyrical Press.