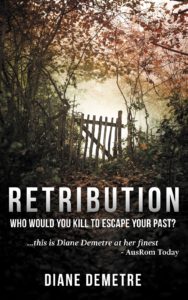 She’s a ballerina with a dark secret. He’s a retired sniper with a tortured past. Will they find love or fall prey to a stalker’s deadly game?

Professional ballerina Jessie Hilton wraps her battle scars in satin pointe shoes, but there’s a deeper hurt that haunts her sleep. When a handsome man steps in to save her from a mugging, something about her hero makes her heavy heart leap. Though her career can’t afford distractions, he may be her sole source of safety when she gains the unwanted attention of a relentless stalker.

Ex-sniper Brad Jordan survived his tour of duty, but a tragic accident cost him the lives of those closest to him. With his faithful border collie Whiskey by his side, Brad gets a second chance when he protects the beautiful Jessie from danger. When the ballerina’s stalker grows more brazen, Brad’s tactical training may be their only weapon against tragedy.

Will Jessie and Brad survive a deadly game, or will the assailant destroy their chance at love?

“But I did find this.” He held up a sealed pink envelope that he’d skewered on the tip of one of Jessie’s kitchen forks. The wary expression on his face kindled a spark of fear in her.

She eyed it with suspicion. “What is it?”

“I’m not sure, but it was propped up on the pillows on your bed and it’s addressed to you. I haven’t touched it.” His flinty gaze riveted her to the spot. An icy shiver skidded down her spine, leaving a path of cold, clammy apprehension.

“You open it.” She rubbed her arms a little too fiercely.

“Do you have any gloves? If this has got fingerprints on it, I don’t want to contaminate evidence.”

“Yes. Under the sink in my bathroom. There’re disposable gloves in a box.” She cocked her head in the direction, indicating he should go and find them. Her legs felt like jelly, and she feared that if she tried to go and get the gloves herself, she’d fall flat on her face.

Within a minute or two, he returned with a pair of gloves that he offered to her. “You’ll have to put them on. They’re too small for me.”

Jessie rubbed her hands, stalling for time. She reached for the gloves and braced herself as if expecting them to send an electric shock up her arms. Doing her best to remain calm, she pushed her hands into the gloves, finishing each with a snap.

He stared at her with an expression of grim determination. “You have to open it, Jessie. If you don’t want to read it, leave it on the table and walk away. I’ll read it if you like.”

Her hands trembled as she plucked the envelope from the fork. The back of it peeled up effortlessly, and she imagined the person who had left it licking it with their vile tongue and sealing it with just enough of their wetness, but not so much as to stick it tight. She swallowed down her revulsion before she gagged on it. Reluctantly, she opened the envelope and eased out an innocent piece of squarely folded pink paper. Flattening it out, she wrenched her gaze away, before she accidentally read its contents.

I began her career as a school teacher before moving into the entertainment industry as a choreographer, director, event manager, dancer and actress, working in television and live theatre, and managing multi-million-dollar productions.

Following my onstage career, I spent many years as a stress & life skills therapist, keynote speaker and presenter, appearing on national radio and television.

This story is my way of paying tribute to the people who have endured more than most. Those who have lived hellish childhoods, those who have fought for our freedom, those who have experienced unimaginable trauma and those who may never recover from their suffering. With the overarching theme of forgiveness and redemption, Retribution pays homage to the human condition in all its glory and misery.

Please share your setting. Have you ever lived or visited there? If so, what did you like most?
As my heroine, Jessie is a soloist in the Australian Ballet company, I needed to set Jessie’s past in the context of a real location. I needed a small rural town within a six to seven hour driving distance from Melbourne, where the Australian Ballet Company is based. I also needed this town to be quintessentially Australian, with an historical bed & breakfast on its outskirts and a believable lair nearby for the antagonist. My husband, who has travelled by road throughout most of Australia suggested a little town called Yass. A place I’d never heard of. Bingo! Not only did Yass look like the town I imagined when I began plotting Retribution, it had a nearby homestead, perfect for Jessie’s childhood—Coodravale Homestead. I weave its history and scenery into the story.

Who are your favorite authors, book/series? Too many to choose from.

If you could have an author roundtable discussion with any authors, who would you invite? Agatha Christie, but unfortunately she’d dead. She was a truly inspired writer

Do you have any hobbies or special things you like to do in your spare time? Meditate, dance and travel to where I want to set my next book

What is the one thing that you would tell an inspiring writer to do? Improve your craft as quickly as you can. Invest money into your craft first, the rest will follow 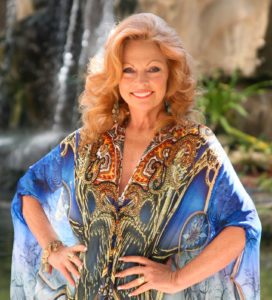 Being a passionate woman who’s always done things a little differently, Diane’s diverse career began as a school teacher before she moved into a full-time career as a professional choreographer, director and dancer, strutting her stuff on many stages throughout Australia. She was responsible for the original multi-million dollar extravaganzas at Conrad Jupiter’s Casino, Gold Coast—Starz & Galaxies.

Following her onstage career, Diane’s thirst for knowledge led her into the field of self-development. Using her highly developed communication skills and love of people, she spent many years as a stress & life skills therapist and life coach, teaching individuals, couples and groups the methodologies of personal success and fulfilment.

With her business acumen, Diane launched into the corporate arena, working in a variety of positions as a consultant in marketing, special events, tourism, business strategies, quality management and human resource management. Combining her entertainment and business backgrounds, she returned to the stage as a keynote speaker and corporate facilitator, educating business leaders in the ‘new mindset’ for business and relationship building in the 21st century.

Assuming the pseudonym of the Goddess of Love, she appeared as a guest presenter on Gold FM radio, Gold Coast, a national radio program broadcast to 1.4million listeners. Her weekly program proved popular with Diane providing empowering advice on life, love, sex and relationships, sprinkled with a good dose of humour. Her passion for life and compulsive sharing nature made her a great inspiration to her listeners. As the Goddess of Love she also appeared as a regular guest on the national television program Beauty & the Beast, where her practical insights were televised to viewers across Australia.

Her romantic suspense, Retribution won the Romance Writers of Australia Emerald Pro Award 2017 for Best Unpublished Manuscript. Diane loves to write genre-busting stories with a twist. Her works are packed with emotional punch and feature empowered heroines who live life to the fullest, much like the author herself. 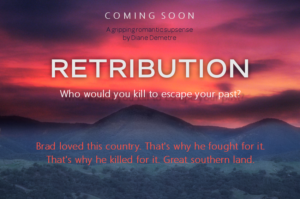 Diane Demetre will be awarding a $25 Amazon/BN GC to a randomly drawn winner via rafflecopter during the tour.