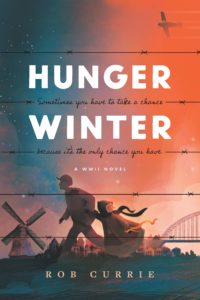 It’s the Netherlands in late 1944. Thirteen-year-old Dirk’s Papa left to fight with the Resistance. Then Mama died. When the Gestapo snatched his older sister and he learned they were coming for him next, Dirk left home in the middle of the night. He had his pockets stuffed with food, his little sister asleep in his arms, and his heart heavy with a dark secret.

Dirk Ingelse’s eyes flew open, and he raised his head off the pillow. Who could be knocking on the front door? Gestapo? His insides turned to ice.

The pounding resumed, the sound carrying easily up the stairs into Dirk’s bedroom. It didn’t sound like the rap of knuckles—it was more like the thumping of an angry fist. Or the butt of a rifle.

It had to be the Gestapo. They had been doing more raids lately, and they often came at night. Who else would pummel the front door of the Ingelse’s farmhouse in the middle of the night and risk getting arrested?

Dirk rolled out of bed and crept to his bedroom window. Easing the curtain open a bit, he kept his face away from the window, like Papa had taught him. He couldn’t see a vehicle. But what if they hid their car?  Dirk’s right hand shook.

He couldn’t hide. They would tear the place apart to find him. And he couldn’t run—they would have the place surrounded. He’d heard stories. His right hand shook harder. It had been doing that a lot ever since—

The assault on the door resumed, even louder this time. “Open up!” growled a deep voice.

Dirk turned from the window and crept down the stairs.

Start by telling us a little about yourself.

My wife and I have two grown sons. While they were growing up, making up stories for them and reading them kids’ books got me hooked on kids’ stories. Hunger Winter was written for kids in grades 4-8. Many adults enjoy it too, but it was written for kids. My full-time job is teaching psychology at Judson University, near Chicago.

Is Hunger Winter a single title or part of a book series?

It is the first book, but I intend to write two more in this series. There are several powerful but little-known stories begging to be the focus of the sequel. I get the delicious privilege of deciding which true aspects of the war experience to base the next two stories on.

My wife is Dutch and my Dad was a World War II veteran so it was a combination of thinking of two people I love dearly. Shortly after starting the research I was staggered by what I learned about the heroism in the face of hardship by the Dutch people, and I realized I had to make this story known. By the end of the war, these innocent civilians were reduced to 300 calories of food per day. That’s the equivalent of one small box of Jello.

Please share your setting for Hunger Winter. Have you ever lived or visited there? If so, what did you like the most?

The book is set in the Netherlands during WWII. I visited there three years ago to teach a class and to do research for this book. My wife loved the catwalk view of the Flower Auction which is a giant flower distribution warehouse. She said the rich aroma was like that of a greenhouse times ten. I enjoyed seeing WWII bunkers. The bunkers were on the northern border and this bunker line held because even though the Germans threw everything they had at the bunkers, they couldn’t overcome the Dutch defenses.

I discovered my love for writing in a high school class in creative writing. Bless Miss Ballard who gave a variety of assignments which I relished. I am pleased to say there is no topical treatment available for treating a bite from the writing bug. 😊

What are your favorite authors, books/series?

If you could have an author round table discussion with any authors, who would you invite?

I love to play basketball, cook, and write humorous poetry. Here’s a poem.

Here’s the story of Alfred the porcupine

Who forgot to send Susie a Valentine.

So he shaved off his pins

To atone for his sins

And he’s hoping that she will forgive sometime.

Writing is not dictation, where the words come to me and I punch them into the computer. That happens sometimes but more often it’s a feeling of a scene or a person and I struggle to figure out how to convey in poignant words what is far beyond words. It’s a taste of a strangely delicious idea and fighting to figure out how to describe the flavor to someone who hasn’t yet sampled it.  As an analogy, imagine explaining the difference between the flavor of ginger and garlic to someone who hasn’t tasted either one.

What is one thing you’d tell an aspiring author to do?

Write regularly, at least a few times each week and preferably every day. Writing is a muscle that gets stronger with use. Write when you feel like writing and when you don’t because often once you get started the ideas will start to come. Write, write, write. For a birthday, anniversary or other special occasion, make a homemade card and write something original. Take time to express yourself with creativity and clarity. Don’t just dash something off. Develop it and let it grow. As it grows, you will grow as a writer.

Life conspired to get Rob Currie to write Hunger Winter: A World War II Novel. His father is a World War II veteran and his wife is Dutch. An award-winning author, it was only a matter of time before he would focus his writing on World War II. Research for Hunger Winter included numerous books, interviews with Dutch WWII survivors, and three weeks in the Netherlands. His investigation revealed astonishing details about the Dutch experience of the war, which begged to be turned into a book.

Born and raised in the suburbs of Detroit, he graduated from Cornerstone University and went on to earn a master’s degree and doctorate in psychology from St. Louis University. He has taught psychology at Judson University since 1987. His hobbies include playing basketball, cooking, and writing poetry.

Rob Currie will be awarding a $10 Amazon/BN GC to a randomly drawn winner via rafflecopter during the tour.