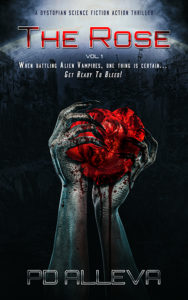 Sandy Cox believed WW3 was over. But for those Alien Vampires, War Has Just Begun.

Forty-eight hours after a World War III treaty is signed Sandy Cox awakens in an underground compound unable to move. Tied to machines she screams for help but no one answers. At least NO ONE HUMAN.

And they’ve taken her unborn child.

Enter Phil, a rebel freedom fighter who has had more than his share of Alien Vampires. Armed with THE BLADES, a sacred alien martial art, he enters the compound on a mission to find Sandy. But as he battles his way through the compound, Phil discovers Sandy has her own agenda. Finding her stolen child is all that matters.

But the vampires have their own plan and Sandy’s baby is at the heart of their diabolical plot. Joined by a crew of rogue soldiers, they must navigate the underground compound, battling genetically mutated humans, aliens and monsters.

When battling Alien Vampires, one thing is certain…Get Ready To Bleed!

Fans of The Hunger Games, George RR Martin, VE Schwab, Star Wars and Ancient Aliens will be fascinated by this high-powered, intelligent, edge of your seat dystopian sci-fi action thriller.

“It’s in the blood, dear,” said Ellen, one of the women Sandy shared time and space with, her skin worn by age, hard labor, and days spent under the sun. Blotches, liver spots and creases led the observer to the eyes. One dark, the other a cataract milky white and she always wore a dark shawl draped over the head and shoulders. Sandy was afraid of Ellen, she reminded Sandy of a gypsy or witch from a fairy-tale.

“Come again?” said Sandy, her eyes shifting from soldier to Ellen to soldier then back to Ellen.

Ellen had cut herself transferring a wood bucket filled with rice to add to an already large trough of buckets. A thick wood splinter pinned in the bottom of her palm dripping with a thick stream of blood. She turned to Sandy raising the bloodied palm and caught a drop of blood in her unwounded hand.

“The blood dear,” said Ellen. “All magic comes from the blood.”

Sandy cringed at the sight; she’d always been squeamish. Her stomach bumped, blood curled. Magic, Sandy thought. If only magic was real. How wonderful would that be? Sandy understood she was naïve, the result of an isolated childhood and her parents’ death when she was ten years old. Not that they had taught the young Sandy about the world she lived in either. They’d kept her under lock and key, never so much as offering a glimpse or advice on the outside world. They were always so cryptic with their explanations, living in an abundant and overgrown mansion as if luxury were a childhood friend. Sure there were plenty of rooms for a child to explore but as time went by those rooms seemed more like a prison than a home.

Years of neglect, isolation and secrets were as torturous as physical suffering. And she was tired of secrets. She wanted to know truth. Truth was like a blanket that keeps you warm in the coldest winter.

“The blood, Sandy,” said Ellen who clenched her fist around those crimson droplets, shaking her hand in front of her face. “All is in the blood.”

What is the sweetest thing someone has done for you?

How would you spend ten thousand bucks?

I’m not in charge of finances; I relented that job to my wife many years ago after she sat me down to have a “conversation” about my Red Bull addiction. So, I’d hand that money over should it come into my hands, however, if it were my decision I’d take a family cruise then head down to Key West for a week or so and use the rest for marketing, probably in one of those high profile magazines for science fiction like Locus Magazine.

Where do you get your best ideas?

Nostalgia. I gather inspiration through old movies and old songs and music. Old books too or movies about those old books. I like to tap into the emotional creativity from long ago. Long ago for me being in those youthful days when life seemed like it would last forever with a Superman chip on my shoulder of immortality. A time when creativity was found in every corner. I’m a child of the 90’s, a plaid wearing, board short sporting, mosh pit moshing red-blooded grunge kid. If there’s a time when I’m feeling uninspired I’ll tap into this youthful mindset, toss on some 90’s music or search for a movie (doesn’t necessarily have to be a movie made in the era, just a movie I watched during that time that had a significant impact) I haven’t seen in a long time. For instance, I’m currently writing a horror thriller novel titled Jigglyspot and the Zero Intellect, a story that pays homage to the grindhouse movies of the seventies, B rated slasher movies in the eighties, old scif-fi movies like 2001: A Space Odyssey, The Black Hole, or Journey to the Center of the Earth, and the Pulp Fiction literary era that existed from the 1920’s to 1950’s, a time that spawned a plethora or great writers including Ray Bradbury, H.P. Lovecraft, and L. Ron Hubbard. I’m about to pass eighty thousand words for Jigglyspot but one of the characters, Kera, keeps giving me trouble. Apparently she’s not satisfied with the way I’m crafting her personality, she keeps forcing me to do rewrites, which, as a writer, is awesome because it helps to grow the craft, pushing the limits and forcing me to delve deeper to do justice and reflect how she wants to be portrayed. Yes, I’m referring to a fictional character whose life was spawned inside my head. But the side effect of all these rewrites was the need to garner more inspiration.

Some might call this writers block, although I don’t see it this way because I continue to write and go back to the chapters and scenes to pen Kera as she wants to be seen. What got me out of this creative funk was 2001: A Space Odyssey and Stanley Kubrick’s obsession with making the film (I watched a few documentaries). But let me shed some light on this because I don’t want you to think that any one of the characters in Kubrick’s masterpiece has anything to do with Kera, not in the least. What I required was inspiration, a muse towards creative performance, drive, and renewed vigor. It’s not always the story details, character depth or overall plot from the movie or book that drives this creativity but rather the creative process itself that taps into that streamlined passion from the past in order to deliver in the moment. Understand that it’s not the movie (book, television shows etc) or the director but rather my experience of the movie. It’s the memory of witnessing the film. There’s a sensation that exists in that moment from the past. There’s feeling inside of it that stirs the muse of creativity further into the mind, heart, and soul with a desire to do more; to do better, to learn to go deeper into the craft, and understanding the characters in the depths of the story.

So, to make a long story short, this process watching 2001 broke open the floodgates that drove the character depth and ideas required to pen Kera in the way she wants. Hope this makes sense and that I haven’t gone too far off the mark.

What comes first, the plot or characters?

Plot. The plot always drops into conscious thought first, usually with a theme behind it. Then I set up each character one by one as if they’re pieces on a chessboard. Then the game begins, or the writing at least.

What does your main character do that makes him/her special?

There are more than a handful of main characters from The Rose Vol. 1, including our main human characters, Sandy and Phil; our alien vampires, Sanos and Telas; and of course our grey alien Mono who has more than a few sinister surprises for the reader to discover. In addition the story features a cast of supporting characters whose exploits and reactions drive the story beyond any two dimensional standards – three dimensions too for that matter. So, I’d like to focus on Cameron, one of the supporting actors. Seems that Cameron has stolen the show according to most readers I’ve talked to. I always like to ask readers to choose a favorite character; obviously Cameron has won the Oscar for his role in The Rose. Cameron is an American soldier assigned to the reprogramming camp housing a slew of American prisoners selected for genetic and pharmaceutical experimentation, something Cameron can’t stomach. Keep in mind that in the world of The Rose most of the human population is still unaware that aliens exist, and they’re definitely not aware that a human/alien conspiracy is behind World War 3 and the country’s current predicament.

When Cameron discovers the conspiracy –and the way he finds out is an eye opener – he’s catapulted into this new world of aliens and rebellion, has no idea how to react or how to convince his military cohorts of the truth. He’s your classic one liner no holds barred character. He’s special because his acceptance of every unknown detail in the story throws him for a loop but he just keeps at it, moving forward with what needs to be done in order for him and his crew to survive. For Cameron, there’s a strange relief when he discovers the truth behind the war, the aliens, and his commanding officers. These truths give him a reason to survive, to fight, and to move forward, no longer bound to orders and free to fight for the greater good. And those one-liners are all too humorous. 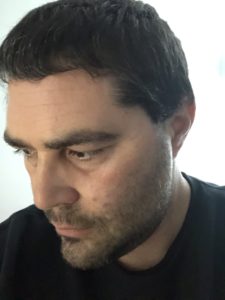 PD Alleva is an alternative fiction author. His novels cross genres, blending mystery, conspiracy, psychology, and action with horror and dystopian science fiction. Alternative fiction is PD’s attempt at describing what readers uncover in any one of his books, a new discovery towards mainstream storytelling. He’s been writing since childhood, creating and developing stories with brash and impactful concepts that he would describe are metaphors for the shifting energies that exist in the universe. PD exists inside of his own universe, working diligently on The Rose Vol. II and exceptional horror novels. Be prepared for Golem, PD’s upcoming horror thriller.