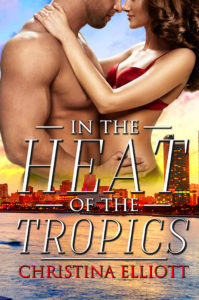 In the Heat of the Tropics

Amid a sweltering Miami summer, a serial killer is haunting the city. Reporter Ingrid Sorenson is assigned the story and her primary source is brusque detective Rick Gonzalez. The pair clash, but sparks of passion ignite. They risk their jobs to give in to their desire, but mistrust of each other’s career motives wedges them apart. Then Ingrid gets a tip that leads her into the killer’s lair. She and Rick must choose between saving themselves or rescuing their love.

She arrived before the police had erected a tent around the victim, and even standing at the mouth of the alley, she could see the silhouette of a man reclining at an odd angle in the driver’s seat of a minivan.

A man murdered in his car. Just like the John Killings. Could the John Killer have returned to mark the year anniversary of his last murder? She tried to control her excitement. If it was the serial killer, this would be a huge story. And she just happened to be working that night.

Then that detective had shown up, wrenching her incredibly good luck to incredibly bad inside two minutes. She still didn’t even know the guy’s name. But maybe he wouldn’t be working the case. Maybe he was just on duty and got the callout, and maybe it wouldn’t matter if he was on the case. Her primary contact at the P.D. was media relations. Still, it was a bad break. Developing a personal relationship with detectives was the way to scoops. She didn’t need him possibly poisoning other cops against her.

The coroner’s tech was photographing the body and the car. Detective Asshole was standing with folded arms, watching. Every now and then, he turned in her direction—checking on her. With her initial excitement fading to disillusion, a wave of tiredness overcame her. She wiped her forehead with her forearm. The air had cooled at this time of night, but it was still muggy. She trudged back to her car, posted a two-sentence brief online about a suspicious death in an alley north of downtown from her phone and headed home.

As she raced down the normally traffic-choked U.S. 1, she recalled that whole embarrassing video incident.  As Mel had predicted, she’d been hauled into Marlena’s office the next day to give her side of the story. Thankfully, Marlena had concluded that it wasn’t Ingrid’s fault. Why would an undercover operative be so reckless as to show up at a media conference? Still, Ingrid had been nervous that it would be held against her when she applied for the police beat, but it hadn’t. Neither did it seem to matter to Major Montoya when Ingrid had gone to the station to introduce herself as the new Star reporter. The only person who held the grudge was the detective, although he seemed to have landed pretty well if he was investigating homicides.

Despite being an asshole, he was cute, hot actually. But being an arrogant jerk seemed to be the required personality trait of good-looking men, as if they knew handsome guys were in short supply and acted accordingly. Still, Ingrid wondered whether something could’ve developed between them if the video thing hadn’t happened.

She had felt a frisson of … what exactly, attraction? … in that look they’d shared, and he must’ve rushed to get to the door before she left the press conference for a reason. She stopped herself. What-ifs were nothing but a trap of despair.  They didn’t bear thinking about.

She pulled into the driveway, tires crunching over the carpet of red berries fallen from the palm trees in her front yard. She was due back at work in a few hours for her regular day shift. She’d get some sleep and head back to follow up the homicide. If she could break the story that the John Killer had returned, and stay ahead on the story after that, maybe she could nab a promotion to a coveted slot on the investigative team. Then she’d never have to worry about running into Detective Asshole again.

Welcome, Christina Elliott! Please start off by telling us a little about yourself.

I’m a former newspaper reporter, editor, and foreign correspondent. I live in Los Angeles, where I’ve lived the past ten years and I’ve been working on my fiction all that time. I’ve gotten used to walls shaking now and then with earthquakes. My laptop will be the first thing I save.

Is In the Heat of the Tropics a single title, or part of a series?

It’s a single title, but I’ve plenty more where that came from! I prefer reading standalones so that’s what I write.

I love both gritty crime fiction and romances so to me romantic suspense is a great genre that combines both elements. I was a newspaper reporter in Miami so that was my obvious lead character, Ingrid, and knowing that reporters often clash with cops over big stories, that formed the basis for the romantic and mystery plot. I also think cops make great alpha heroes. Who doesn’t like a man in uniform?

Please share your setting for In the Heat of the Tropics. Have you ever lived or visited there? If so, what did you like most?

The book is set in Miami, which is a sexy city. I lived there for five years so I know it pretty well.   I also set it during the summer, which is a brutal season in Miami – six straight months of 95-degree heat with 80-85% humidity. Lots of bad hair days! The best thing about Miami is the winter when the weather is about the most perfect you’ll find. I also sorely miss the Cuban coffee and the bathtub-temperature of the sea. Sigh!

When I was about five, I won a prize for “writing interesting stories.” I have no idea what I wrote at that early age. They must have been very simple stories with one-syllable words but they obviously impressed the teacher! Where this gene came from, I have no idea since neither of my parents are writers although I have always been keen readers and the library was a constant in my childhood. I’ve always been a voracious reader and that made me want to write books since I was little. In high school, I wrote my first formal short story and that made it into the school literary magazine. I then became a journalist. So really I have been writing my whole life.

What would you be doing if you weren’t a writer?

I’d be a comedic actor. I took some acting classes and not only found them hugely therapeutic but also found I have a knack for comedy. I find being zany and way out a huge release. It’s weird because I love reading, writing and watching drama, but when I act, it’s comedy all the way!

My passion, other than books, is traveling. I’ve traveled to about sixty-five countries, the more remote and exotic the better. I love other experiencing other cultures and languages, delving into the unknown of a foreign place.  I think travel is a great experience for a novelist. You pick up so many bits and pieces that you can incorporate into plot, setting or character to make your book unique.

What’s the strangest thing you’ve had happen with this book?

Here’s kind of a weird moment. I was working as a reporter in Los Angeles, and I got to do a tour one day with a police sergeant named Rick of his particular area of the city. As we’re driving around, I suddenly realized I was actually living a scene from my book, when my detective character Rick takes Ingrid out on a tour of the serial killer sites! I excitedly told the sergeant, but he didn’t fully appreciate the meaning of it. I think he thought I was hitting on him!

Persevere. Don’t give up in the face of rejection. Dig deep within yourself to find the wherewithal to keep going, and don’t listen to naysayers! Surround yourself with positive, supportive people. Writing is a hard and largely solo journey so get rid of any baggage that is weighing you down! Believe me, you don’t need it!

What would you want to be engraved on your headstone?

Something simple: “An observer and chronicler of life,” that would do nicely. 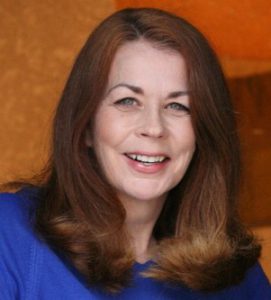 Christina Elliott is a former Miami newspaper reporter and editor. She now writes spicy romantic suspense novels from Los Angeles, where she’s glad to report there are far fewer bad-hair days but sadly far less Cuban coffee. She is a member of the Romance Writers of America.

Christina Elliott will be awarding a $15 Amazon/BN GC to a randomly drawn winner via rafflecopter during the tour.