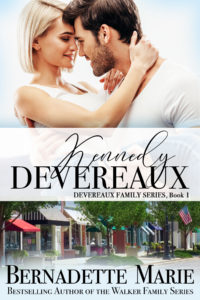 Kennedy Devereaux, owner of Kennedy Devereaux Designs, is a sight to behold in her signature pink colors, accented with custom designed jewelry. Intriguing enough that Joel Kingsley, the man building the new business next door, can’t help but keep coming around, just to get to know the woman in the designer clothes. He finds she’s not such a mystery, and his charm easily wins her over–until she finds that he’s forgotten to let her in on the secrets of his past.

“Who’s smitten with me?” Oliver asked as he set his box on the table. “Oh, tell me it’s that gal next door.”

Joel discarded the rest of the bar mix in his hand into the bucket they’d placed for trash under the table. Oliver’s words had felt like a kick in the gut, and Jeff must have noticed. Without hesitation, he kicked again.

“Which gal next door?” his brother asked. “The blonde in the pink and heels?”

“Are you kidding me? Too pretentious. Too stuck up. I’ve been snubbed by the cheerleading squad and the prom queen before.” He began to unload the box he’d set on the table. “I’m talking the other one. Not the pregnant one either,” he said holding up a finger in objection before one of the mentioned her. “The leggy one with the mess of auburn hair. Sexy as hell. Like maybe, she was the wannabe jock that fit in with the pretty girls and balanced them out. You know.”

They all howled in laughter at his analogy, except for Joel who was able to finally breathe. Good, he thought. No one had their sights set on Kennedy except him. But Jeff was right. If she ended up hating him, it could be bad for them.

As Oliver cracked open the first growler and passed around the plastic cups, Joel decided he couldn’t afford for Kennedy to hate him.

Welcome Bernadette Marie! Please start off by telling us a little about yourself. I am the bestselling author of over 40 contemporary romance titles as well as the CEO of 5 Prince Publishing. I am the happily married mother of five sons, who honestly, after fourteen years, has been enjoying the break from our constant hockey schedule (but don’t tell my kids.) I am also working toward my certified 2nd degree black belt, which I will test for in April.

What were your inspirations for the story? Kennedy owns a fashion boutique that is one I drew on from my childhood. Kennedy’s store is feminine and pink, filled with beautiful clothes, with a back room for private, exclusive, shopping of one of a kind fashion pieces. My cousin once worked in a boutique like Kennedy’s, and she introduced my mother to it. Over the years we became friends with the owner, who became one of my clients when I opened my first salon. Years later, when she moved away, I would buy the house where her boutique was and open a bigger salon there.

Please share your setting for Kennedy Devereaux. Have you ever lived or visited there? If so, what did you like most? Kennedy Devereaux is set in the Olde Town part of a fictional city that is never named. I’ve drawn from the Olde Towns in my area, many of which have new stores and tap houses that have taken over the antique stores of the past.

When did the writing bug first bite? I have been writing continuously since I was thirteen.

Who are you favorite authors, book/series? I love Nora Roberts’ contemporary romances, and have an appreciation for her romantic suspenses and paranormal. I also love Karen White and her Tradd Street series.

If you could have an author roundtable discussion with any authors, who would you invite? I would invite any author that would like to be part of it. Over the years of having these kinds of opportunities at conferences,  I have found that authors who are just diving into the industry, and those who have big traditional contracts, all have something new and unique to share.

Do you have any hobbies or special things you like to do in your spare time? I’m a newbie quilter with a few projects under my belt. I also recently went back to my martial arts background, and am enjoying training again.

What’s the strangest thing you’ve heard or seen? I leave this to some of the traveling chefs on TV. I can’t think of anything specifically I’ve seen or heard that’s strange, unless some TV chef is eating it!

What is the one thing that you would tell an inspiring writer to do? 1. Never stop writing. Once you pen The End, start a new project while you polish the other. 2. Join a writing organization and surround yourself with like minded people in the industry.

Bestselling Author Bernadette Marie is known for building families readers want to be part of. Her series The Keller Family has graced bestseller charts since its release in 2011. Since then she has authored and published over thirty-five books. The married mother of five sons promises romances with a Happily Ever After always…and says she can write it because she lives it.

Obsessed with the art of writing and the business of publishing, chronic entrepreneur Bernadette Marie established her own publishing house, 5 Prince Publishing, in 2011 to bring her own work to market as well as offer an opportunity for fresh voices in fiction to find a home as well.

When not immersed in the writing/publishing world, Bernadette Marie and her husband are shuffling their five hockey playing boys around town to practices and games as well as running their family business. She is a lover of a good stout craft beer and might have an unhealthy addiction to chocolate.