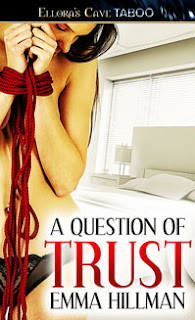 Maxine has a problem. She has to seduce a man she doesn’t know and steal from him once he’s asleep. And not only is Dylan the most handsome man she’s ever seen, he’s also into bondage and BDSM and all that stuff she’s never even thought to try.
When he falls into her trap and they spend the night together, something sparks between them. Dylan must have felt it too, because he asks her to go back to L.A. with him to become his submissive. Eager to get away from the men coercing her, Maxine jumps at the opportunity.
Dylan is a tough man to please, but under his hard touch, Maxine soon blossoms. But her enemies are near, and her secrets difficult to hide. When disaster strikes, it’s up to Maxine to prove she’s worthy of Dylan’s trust. For better or worse.

One thought on “A Question of Trust-Review”