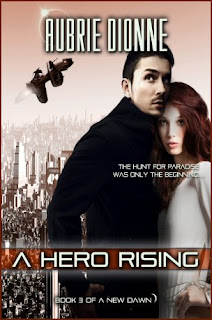 Giveaway Alert!!!!  At the end of the tour, I will award one ebook copy of “A Hero Rising”.  Make sure you leave a comment with your email address so we can contact you.  Good Luck!
Title: A Hero Rising (New Dawn Series, Book #3)
Author: Aubrie Dionne
Publisher: Entangled Publishing
Length: 40,000 words
Genre: Sci-Fi Romance
Available at:
Amazon| Barnes & Noble
A Recommended Read from Two Lips Reviews:
http://www.twolipsreviews.com/content/index.php?option=com_content&task=view&id=7480&Itemid=36
Blurb:
After watching his love leave on a colony ship, James Wilfred must save those left behind from a planetary apocalypse. Their salvation lies in an unfinished ship tucked away in a secret government base, and only James can break in and pilot him and his people to freedom on a nearby space station.
Skye O’Connor’s boyfriend never returns after his gang attempts an assassination of the Governor, and the State Building is destroyed. Worse, crazed moonshiners addicted to the chemical Morpheus have stormed the city, and she must find a safe place for her and her boyfriend’s daughter. When a heroic man saves her, Skye asks to accompany him on his quest to find the last colony ship left on Earth.
As the city falls around them, James and Skye must work together to build a new future, all the while rediscovering their ability to love, before the apocalypse claims them both.
Excerpt #1:
Clutching his retractable cable, James lowered himself down the glassy surface of the high-rise as the wind stole the warmth of the sheets he’d just left behind. He glanced at the fluttering curtain three stories above his, wondering how Mestasis would feel when she awoke to an empty bed. He detached his grappling hook and slipped inside the balcony of the building, fast as a diving raven’s shadow.
If only I could stay longer. If only things could be different.

His wristband flashed another message. If you don’t get down here within the hour, I’m coming to look for you.

The thought of Dal stumbling through the abandoned subway by himself sent adrenaline rushing through James’s veins. The lower levels had been dangerous since Dal was a boy, but with the introduction of Morpheus, the desperate scavengers had grown into vicious savages.
James typed a message back, hoping Dal would believe him. I’ll be there. Stay where you are.

Mestasis will have to understand.

He took an elevator down as far as it worked, holding onto the slim hope he’d have a chance to give Mestasis a decent good-bye later. The elevator creaked to a halt and the doors parted to a corridor lit by one flickering bulb. Crumpled rags and broken vials dusted with the dried, silvery sheen of Morpheus lined the floor.
The lower levels.
No one decent ventured down this far, so the government didn’t find it necessary to cover low level repairs. It would only bring up gangmen, like himself, to the upper levels. But some of us are good. It’s those Razornecks that give gangs a bad name.
He jogged to the end and slid down a plastic recycling chute to Level Five. The chute ended with a rusted metal grating piled high with cracked bottles and compacted cans. He kicked out the grating and emerged on a stairwell landing. Cracked bottles rattled around him as he shuffled through the debris to Level One, the place where only the bravest, or craziest, treaded alone.
The scent of dank air and old garbage wafted up from the moldy floor. It smelled like home. He’d been away too long. James ducked through a shattered window to an alley between the buildings.

Twilight spread through the sky, stretching the shadows of lumbering heaps of old mattresses, broken ionizers, and tattered plastic bags. Using the darkness as his cloak, he climbed through the debris and checked over his shoulder. The alley lay as silent as a wasteland. Residents had boarded most of the windows to keep out thieves, but apartments lay empty and dark as deep space.

Three windows down, a small child with wispy black hair peered out, clicking off a flickering light stick. The child disappeared as he approached. James reached in his pocket and left an orange on the sill before ducking away.

A stone stairway loomed at the end of the alley like a mouth to the underworld. James slipped down a corroded railing to an old subterranean transportation system once used by his ancestors in the days before the mega-high-rises and the elite’s reign of the upper levels.
Pitch-black oozed from under the brick, and his hair glowed neon green as the darkness enveloped him. The radiance was just enough to light his path, the permanent dye a trademark of his gang. James picked up his pace and jogged along the tracks, approaching a thick cement door with graffiti scribbled in hasty strokes.
He raised his hand to knock, but he paused with his fist in midair. Shuffling echoed down the track to his right. No one could see him entering the Radioactive Hand of Justice’s underground facility—he had to find out who had found him and make sure he or she wouldn’t talk.
James slipped past the door and tiptoed closer, his hair casting light a few feet around him in every direction. No one could sneak up on him.
Was it Dal?
“Hello?” His voice echoed down the shaft.
About the Author: 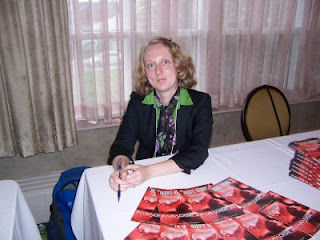